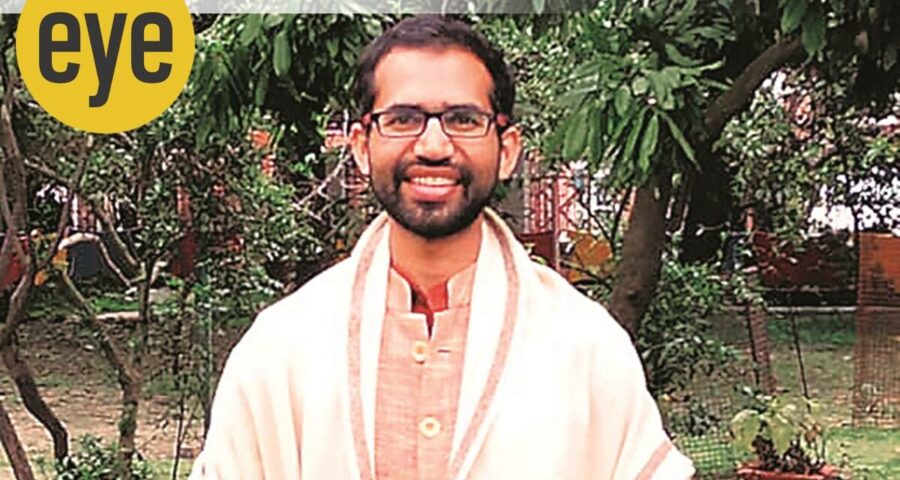 Rishiraj Pathak, winner of Sahitya Akademi Yuva Puraskar 2020, on making the ancient language accessible to people and being a feminist 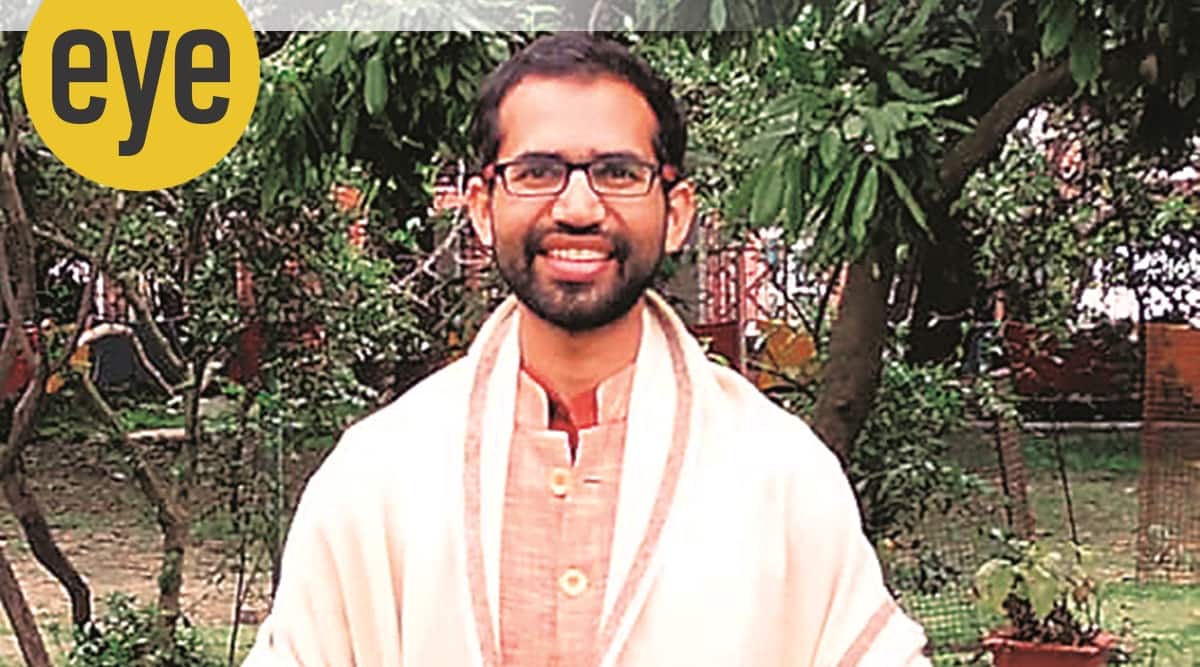 Sanskrit poet Rishiraj Pathak wrote these lines in a poem, titled Prarthana, in late 2020, when the pandemic seemed to be retreating and the air in Delhi was clean following months of lockdown. In April this year, as the second wave began to sweep through India, Pathak tested positive. During the time he spent in home quarantine in Delhi, his phone filled with messages about friends and teachers who had passed away. “We are all grieving, and in fear of what is happening. This is a terrible time,” says Pathak. In Kālo, Ham, another poem he wrote last year, the coronavirus appears as a fierce metaphorical figure called Kāla or Time, which waves its arms as it dances with the living and the dead. “Time has compelled us to confront our mortality and introduced us to our souls,” says Pathak, 32.

He is one of India’s brightest young litterateurs, and the winner of Sahitya Akademi Yuva Puraskar 2020, among India’s highest literary honours, for a book of poetry, Aadyonmeshah. “His work comes from a place of honesty and, hence, is exceptional. His understanding of the nuances of music render a lyrical quality to his poems and this makes him a complete package to work with across various artistic disciplines,” says Payal Ramchandani, a London-based dancer, who has frequently collaborated with Pathak and is currently working on a performance based on Kālo, Ham.

“People think that, because I am a Sanskrit poet, I am a relic from the Vedic age. The truth is that I wear shirt and trousers, as well as dhoti-kurta,” says Pathak. In Aadyonmeshah, he displays traditional reverence in poems that praise his gurus and his motherland but there are also playful experiments such as a Facebook chat in verse. “When rishis roamed the forests of ancient India, Sanskrit was the language of communication. The tradition of learning Sanskrit has not broken though it has reduced. Few people speak it today but, in universities teaching the subject, you can still hear cricket commentaries in Sanskrit,” he says. Sanskrit poetry addresses a range of realities, from beauty expressed through Śṝṅgāra rasa to humorous episodes in Hāsya rasa. “Every writer makes their own impressions. I like writing about nature,” says Pathak.

Sanskrit occupies a dichotomous position in the modern Indian psyche. It is the language of some of the country’s oldest and richest texts and the root of many regional mother tongues, but less than one per cent of the population is conversant in it. Though Uttarakhand has made Sanskrit the official language, you have to travel to Karnataka to find the only Indian village, called Mattur, where Sanskrit is used in everyday conversation. “Most of the students, who take up Sanskrit in college, do so because they did not get admission into any other course. Only a small number is genuinely interested,” says Pathak, who is Assistant Professor at the Sanskrit Department of Delhi University’s SPM College.

He was drawn to Sanskrit because, at the age of eight, he dreamed that the god Krishna wanted him to study the Sāmaveda, a sacred book of chants and melodies. Born and raised in Delhi, Pathak was homeschooled by his parents — Narayan and Suneeta Pathak, who wanted him to study texts on Indian culture alongside regular subjects — but they did not know Sanskrit, in which the Vedas are written. “Rishiraj was devout from childhood but when he told us about his dream, I felt that he was using religion as an excuse to not study. His father, however, was confident that he would become a great scholar one day,” says his mother.
Pathak wanted to learn Sanskrit through the oral tradition of Vedic chanting called Guru Mukh Parampara. After several months of searching, his father, a teacher himself, found out about the Shri Guru Gangeshwaranand Chaturved Shodh Sansthan, a school in Nasik, Maharashtra, which taught the four Vedas in this ancient tradition. Pathak left home and spent the next year-and-a-half studying the scriptures. “The lyrical poetry and chants of Samaveda attracted me and sealed my love for Sanskrit,” he says. Sanskrit is taught in many regular schools in the country at the junior level, the syllabus focussed more on memorising grammar to pass exams than developing an interest in the subject. “Even the stories in Sanskrit textbooks are forgettable. There should be tales about Arthashashtra and ancient Indian history to inspire the curiosity of children,” says Pathak.

He did not find it difficult to live away from home at a young age. “From the start, I liked being by myself and had almost no friends my age. My friendship with my parents was very strong and the vidwaan (intellectuals), who visited our house and were 40-50 years senior to me, were my closest companions. Dosti yaari mein ruchi nahin hai,” he says. It was when he joined regular school in Class IX that Pathak stood out among his peers as the boy who excelled in Sanskrit, wore spectacles and, on Vasant Panchami, turned up in a dhoti. “I used to think that the boys, who made fun of me, were foolish and, if I bothered about them, I would not grow or develop my intellect,” says Pathak. He continued to do well in Sanskrit, and topped in his graduation and post-graduation studies in the subject from Hindu College, Delhi University. For his PhD, he wrote a thesis, titled “A Comprehensive Study on the Phonology, Semantics and Musicology of the Sāmavedic Accents”.

Pathak had started writing poetry when he was around nine, mostly Hindi bhajans and songs in praise of God. As his command over Sanskrit grew, it became his language of expression. Over the years, his social conscience has emerged in poems such as on Nirbhaya, a woman who was gang-raped in a moving bus in 2012, and an ode to Delhi through 110 shlokas that trace the city’s history. Pathak’s poetry is also marked by strong rhythms and can be sung. “My family has a deep musical tradition. When I used to come home from school, I would see my father sitting with a harmonium. I would quickly freshen up and bring out the tabla to accompany him, not knowing how long we would play. While other children wanted to be doctors and engineers, I dreamed of being a music composer,” he says. Initially trained by his father in the Rasiya folk tradition, which belongs to the Braj region, the land of Krishna, Pathak studied Indian classical music at Gandharva Mahavidyalaya in Delhi and also trained in tabla and Kathak, among others.

“Rishiraj is a very curious person and enthusiastic about wanting to learn more. For a dance festival, we were given a Sanskrit couplet and each dancer was to interpret it in her own way. I asked Rishiraj to write something which would come before these four lines. I was amazed by what he wrote, because not only was it poetic and beautiful but also impossible to tell apart in style from the original couplet that was written thousands of years ago,” says Arushi Mudgal, an Odissi dancer.

Every Sunday, before the pandemic, Pathak worked towards spreading knowledge of Indian traditional texts. His house would be filled with homemakers, working people and children from the locality who wanted to hear him talk of texts such as the Bhagavad Gita, the Upanishad and the Ramayana. “I translate the knowledge that is present in Sanskrit to Hindi so that local people can become interested in our ancient heritage,” he says. To more serious disciples, who connect over Zoom, he holds lessons in the Natyashashtra, among others.

Pathak is also working on his next big project, a poem on the violated women of Sanskrit literature, Draupadi, Sita and Shakuntala. “Because I have studied Valmiki, I have a problem with Ram. He was a good king but not a good husband. I am a feminist and would like to write about the regressive way in which men in Indian culture view women,” he says. Women are not taught the sacred mantras in the Indian tradition, which Pathak has decided to break by offering to teach Sanskrit mantras to his women students in Delhi University. “Sanskritam is a neutral gender, which means that neither woman nor man dominates,” he says.

The day Pathak received the call informing him that he had been selected for the Sahitya Akademi Yuva Puraskar, it was Shiv Ratri and he was busy with puja at his house. “I had finished pouring water over the idol of Shiva when the phone rang. Over the next few hours, it rang many times as senior writers and poets got in touch. I am overwhelmed that my hard work in writing poetry in Sanskrit is being appreciated by so many people,” says Pathak.