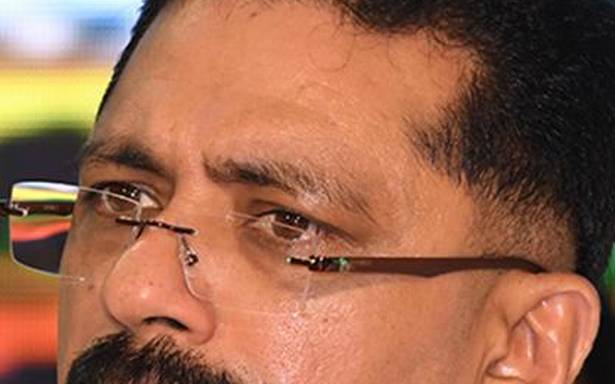 Minister for Higher Education and Minority Welfare K. T. Jaleel has submitted his resignation to Chief Minister Pinarayi Vijayan. It was unclear whether Mr. Vijayan has forwarded it to Kerala Governor Arif Muhammad Khan.

Mr. Jaleel had come under a cloud after the Kerala Lok Ayukta found him guilty of nepotism. In a damning verdict last week, the panel found that Mr. Jaleel had sought to illegally influence the Kerala State Minorities Welfare Commission to appoint "his second cousin" as general manager.

The Lok Ayukta said Mr. Jaleel’s action amounted to "abuse of power, favouritism, nepotism and violation of oath of office". It said Mr. Jaleel had displayed a "lack of integrity" as Minister by tailoring the job qualification to meet his relative’s academic credentials.

"He (Jaleel) should not continue as a member of the Council of Minister", the Lok Ayukta said in its order.

On Monday, the forum forwarded the finding to Mr. Vijayan for appropriate action.

In a Facebook post, Mr. Jaleel said he was the victim of the "right-wing" media witch-hunt. Political opponents had prompted the persecution.’

Earlier, Mr. Jaleel met CPI(M) leaders at the AKG Centre here. By one account, the party backed Mr. Jaleel’s right to move the HC. However, the leaders reportedly opined that political propriety demanded that Mr. Jaleel step down without waiting for the HC’s decision.

CPI(M) Polit Bureau member Kodiyeri Balakrishnan was reportedly present at the AKG Centre. A party insider pointed out that Industries Minister E. P. Jayarajan had resigned in 2016 on an "unproven" charge of nepotism. In 2017, late Nationalist Congress Party (NCP) leader and Transport Minister Thomas Chandy had quit the cabinet after a court found him guilty of illegally reclaiming wetlands. Hence, the CPI(M) expected Mr. Jaleel to honour the LDF tradition.

Leader of Opposition Ramesh Chennithala said Mr. Jaleel had no recourse but to resign. There was nothing ethical in his action. It smacked of desperation and helplessness, he said.