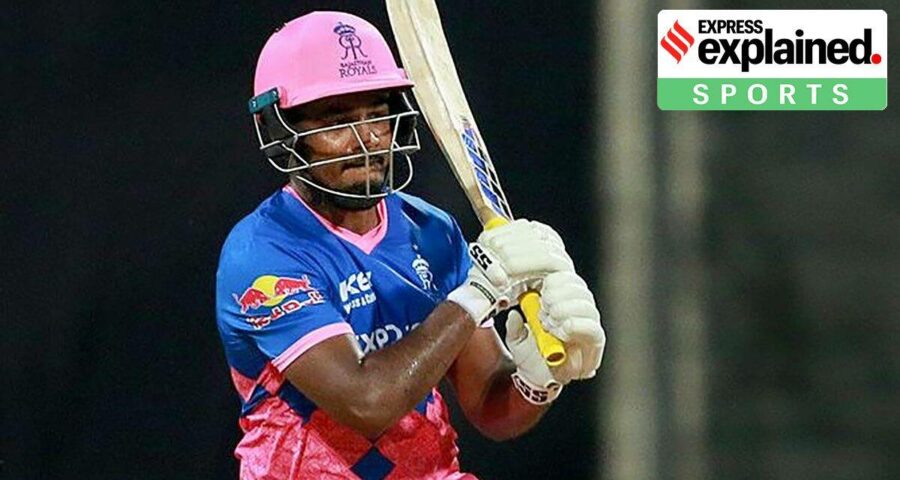 Sanju Samson is blessed with fast hands, sinewy forearms and excellent hand-eye coordination. That apart, it's also the result of the hard work during the lockdown last year. 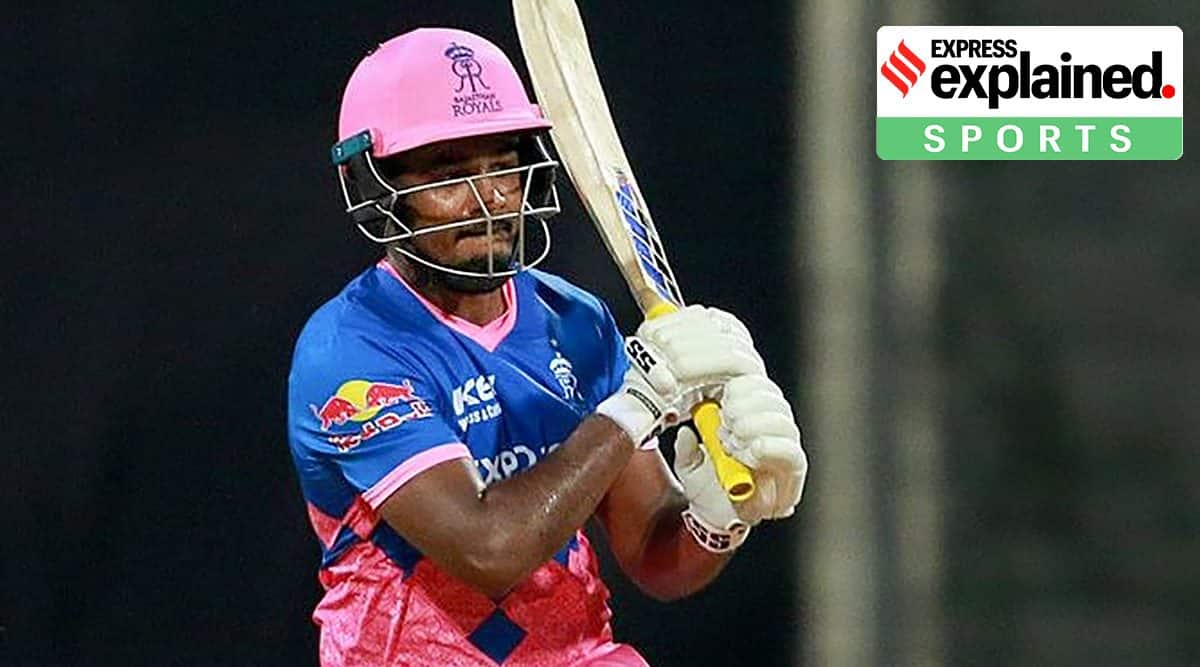 Sanju Samson marked his IPL captaincy debut with a blistering century against Punjab Kings in Mumbai, a scarcely-believable 63-ball 119. Nevertheless, his superlative efforts couldn’t take his team past the finish line, as he was dismissed on the final delivery of the match, to hand Punjab a four-run win. Royals’ team director Kumar Sangakkara praised his captain’s confidence and unflappable temperament despite the agonising miss in a nerve-wracking, high-scoring match that produced 438 runs from 40 overs.

What made Sanju Samson’s knock special?

Considering the dire circumstances under which this knock was orchestrated, it surely was one for the ages. In pursuit of a 222-run target, Royals were off to a disastrous start, losing Ben Stokes, Manan Vohra and Jos Buttler inside the first 8 overs. Despite the flurry of wickets, Sanju did not lose his composure and backed himself to seal the game if he stayed till the end. At the halfway stage, Royals were 95/3, with the asking rate well in excess of 12 runs per over. However, he kept unfurling those big hits consistently.

Royals surged between 12.5 overs to 16.2 overs — a manic 21 deliveries in which Samson and Riyan Parag plundered 52 runs. Parag’s brute force interspersed with Sanju’s languid grace made it a sublime jugalbandi. Parag’s exit didn’t fluster the Royals captain. He brought up his ton in just 54 deliveries, carving out a four, six and a four off consecutive deliveries from Australian pacer Jhye Richardson. Sanju continued with the blitzkrieg, which brought the equation down to 13 runs from the final over. However, Punjab’s left-arm pacer Arshdeep Singh held his nerve to take his team through. The fact that after Sanju’s 119, the next best score for Parag’s 25, only underlined the 26-year-old’s sheer dominance at the Wankhede Stadium on Monday night. 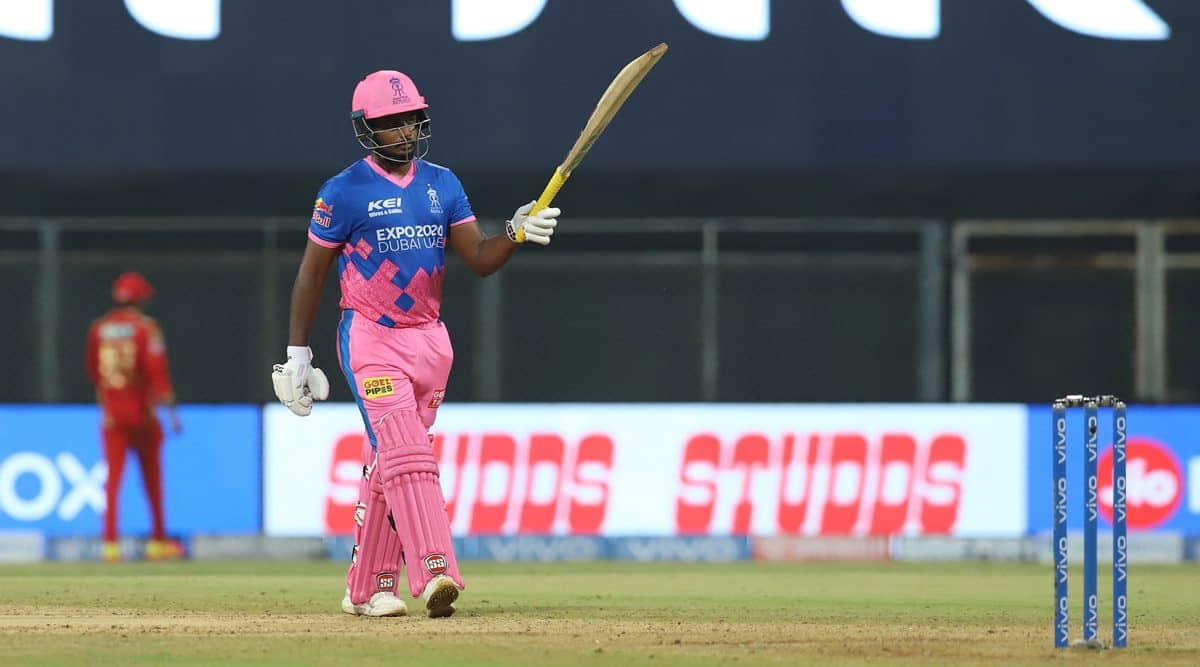 What transpired in those final moments?

With 13 required from the final over, it seemed well within Samson’s grasp. But Arshdeep played it smart by angling it away from the right-hander, conscious of not pitching it in Sanju’s arch. Punjab captain only complemented Arshdeep’s ploy by setting a predominantly off-side field. After a miss and a brace of singles, Sanju pummelled the fourth over long-on for a six. With five required off 2 balls, Sanju denied a single to Chris Morris, believing that he could clear the fence in the last ball. The final delivery was in his hitting zone though, but a mixture of nerves and exhaustion meant he could only drill it to the long-off fielder, stationed near the boundary line.

Was this a near-perfect innings?

Well, the second part of the innings was a dream. But the start was far from perfect. Sanju began on a tentative note and struggled with the timing against Punjab’s pacers. He also survived two reprieves — when he was on 12, he edged Arshdeep to Rahul, who dropped a straightforward chance. Later, when he was on 35, and looking to up the ante, but was dropped off Riley Meredith’s bowling by Mayank Agarwal at mid-off. Sanju rode on his luck to register his 50 in 33 deliveries. He then teed off to secure the next 50 in just 21 deliveries.

“The second part of my innings was my best IPL performance,” he said during the post-match presentation. “The first part I was really struggling to get my rhythm but I went back to the basics, communicated with my partners, I took my time a bit more, respected the bowlers bowling well, I took the singles and I rotated the strike and slowly I got into my rhythm,” he added.

What makes him such a dangerous proposition in this format?

One of the fundamental aspects of his batsmanship is his ability to play straight. Rarely does one find him playing across the line to either spinners or pacers. Another facet is his rock-solid, still base. Sanju rarely sashays down the track. Instead, he prefers to stay still at the crease and unfurls that lovely swing off the bat. In hindsight, Punjab bowlers, especially the spinner Murugan Ashwin was guilty of pitching it up and in the slot. In that vein, he is a bit of an antithesis to most of the modern-day practitioners, who resort to those cute ramp shots and glides over the third-man and fine-leg regions. Sanju stays in shape and prefers to hit straight over the bowler’s head. This is a high-reward technique that has served him well. What is the secret behind Sanju’s ability to clear the boundary consistently?

He is blessed with fast hands, sinewy forearms and excellent hand-eye coordination. That apart, it’s also the result of the hard work during the lockdown last year. During the five months when competitive cricketing activity was suspended, Sanju trained with tennis balls on his mentor and former Kerala team-mate, Raiphi Gomez’s terrace in Thiruvananthapuram. Despite the space constraints, the senior pro would replicate different match situations and urge him to demonstrate his power-hitting by keeping a still base. This was done with such pig-headed devotion that over time, it became part of Sanju’s muscle memory.

He also teamed up with Amal Manohar, his college mate at Thiruvanthapuram’s Mar Ivanios College. Manohar, a former national-level athlete, is also a certified fitness trainer. “We met in April last year, and after conducting a basic test on Sanju, I realised that he was hardly getting time to recover between matches in the IPL. In other words, he was carrying the fatigue from one match to the other, which was acting as an impediment,” Manohar had told The Indian Express. He devised a series of exercises that helped Sanju build muscle mass, become stronger, improve his agility, all of which would aid in quicker recovery between matches. All these efforts are now reaping dividends.

Going forward, what does Sanju need to guard against?

Simply put, his glaring inconsistency levels. With three sublime centuries in the IPL and a raft of eye-catching fifties, Sanju has shown what he is capable of as a batsman. Frustratingly, these glorious highs in his career are usually followed by a sustained period of low scores. Take IPL 2020 for example. He began with a bang, shellacking two power-packed performances — a 32-ball 74 against Chennai Super Kings and a 42-ball 85 versus Kings XI Punjab — before it all went downhill for him as Rajasthan Royals finished at the bottom of the points table. Another promising season nipped in the bud.

In order to be more consistent, Sanju needs to be a bit more judicious in his shot selection, and be a little more selective in targeting a particular bowler from the opposition camp. Backed by his big-hitting prowess, if Sanju can add consistency to his game, it would give him a sense of infallibility and destructive hue to his batting.