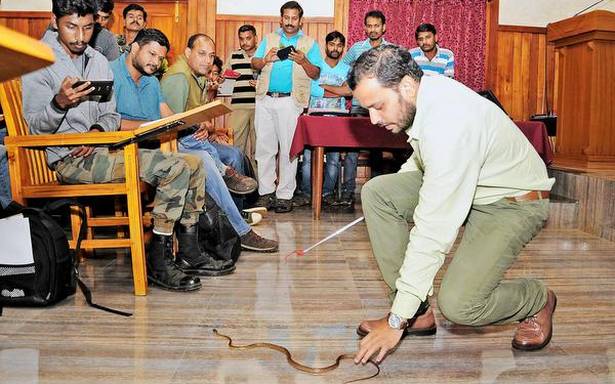 The use of snake tongs as an equipment to handle reptiles has come in for criticism from herpetologists and expert snake handlers from across the State.

The snake tongs or forceps are used mostly by amateur snake handlers to restrict the movement of the snake’s head, by trapping the head of the reptile between the pincers.

However, the tongs, which came into prominence in North America to capture specific species of snakes, are being used incorrectly by not only amateur handlers but also the fire department to rescue the reptiles, often cause an injury that will lead to the reptile’s death, say herpetologists.

“For the price of a few hundred rupees, snake tongs can be purchased online by anyone. However, the use of these tongs is extremely dangerous to the reptile.

If the handler applies too much pressure, it can easily sever the snake’s spinal column, or cause other serious injuries,” said N. Sadiq Ali, founder of the Wildlife and Nature Conservation Trust (WNCT), who has held training programmes for forest staff on how to safely handle snakes.

Another prominent herpetologist from Tamil Nadu, who requested anonymity, said that almost all Indian snake species could be handled easily with a “snake hook,” which is significantly less dangerous to the animal.

“Even in parts of the world where the snake tongs are used, they are used only as a last resort to supplement the rescue, and not as a crutch in all situations. This is why snake handlers need to understand the anatomy of the reptile, and handling snakes, especially by amateurs, needs to be treated as a last resort,” he said.

“However, each incident is treated on a case-by-case basis, as in some cases, a person might have intervened fearing the safety of people nearby,” said Mr. Anwardeen.

Mr. Sadiq Ali said that even staff from the fire department were called to rescue snakes.

“Only trained Forest Department staff or rescuers notified by the Forest Department should be allowed to rescue snakes if the situation requires. And the use of snake tongs as a handling tool in general needs to be discouraged,” he said.