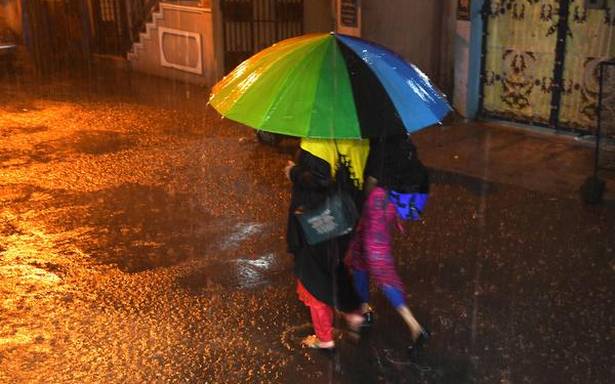 Heavy rains and thunderstorms lashed several parts of the city on Monday, with water entering residences and shops in many parts of the city including Kaval Byrasandra, Nelamangala, Chikkabanavara, Nagawara, HBR Layout and Varthur. In the East zone, one of the rajakavules overflowed.

As the rain intensified in the evening, motorists had a tough time negotiating water-logged areas. Major roads were flooded at Majestic, Malleswaram, Rajajinagar and Mahalakshmi Layout resulting in traffic snarls. There were reports of vehicles breaking down. Potholes and craters made the situation worse. Traffic was disrupted in Central Business District Area too.

Many people took to Twitter and other social media platforms to highlight the sorry state of roads. “One downpour and Bangalorean streets are flooded… ankle deep… but it counts. It’s not because of the rains, but the weeping sewers and manholes,” said one Twitter user.

“Roads in #Bengaluru has turned into rivers now at many places. Avoid traveling for some more time please. It’s pelting down heavily across the city,” said @Bnglrweatherman.

Rain / thundershowers are forecast for the next two days.