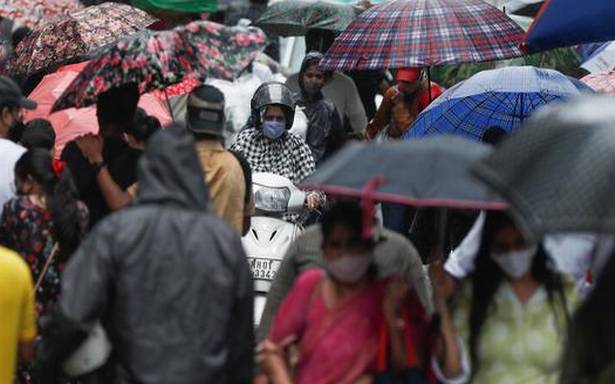 With the southwest monsoon gradually beginning to show signs of revival, heavy showers were witnessed on Wednesday in Mumbai city, Konkan and Marathwada.

At least five people are reported to have died in rain-related mishaps over the past five days, said authorities. One person was struck by lightning in Nanded district, while two died in Hingoli district when their car was washed away in an overflowing stream.

Two more died in Raigad district where a number of bridges were submerged.

Ratnagiri, in the Konkan, regions and Kolhapur, in western Maharashtra, have felt the brunt real force of the monsoon over the State.

Heavy rains with thunderstorms are expected in many places in these seven districts with wind speeds of 30 to 40 km per hour.

Parts of Pune, especially ghat areas, may experience heavy showers over the next couple of days.

Parts of Parbhani, Aurangabad and Nanded districts have received been witnessing incessant showers over the past week, as has Rajapur in Ratnagiri district, which has received over rainfall in excess of 150 mm rain in the last 24 hours.

In Parbhani, rains have disrupted life with flooding of streets, marketplaces as well as arterial roads.

Traffic has completely come to a standstill along the Mumbai-Goa highway owing to landslides in Sindhudurg and Raigad districts.