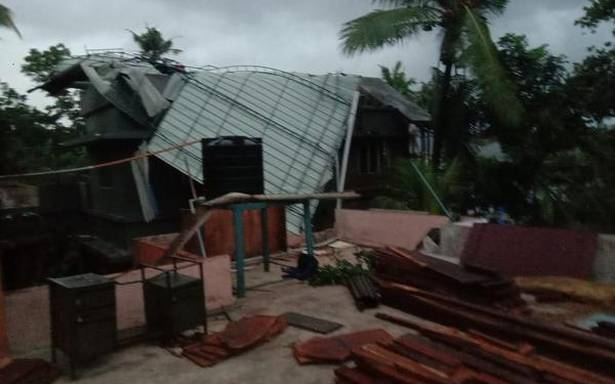 Heavy wind and rain caused widespread damage to homes and standing crops across Ernakulam district in the early hours of Tuesday even as power outage disrupted normal businesses in several places.

P.V. Mohanan, member of ward 3 in Alangad panchayat, said trees fell over more than a dozen homes in the panchayat. Most of the houses had no electricity for more than three hours. He said on Tuesday that Fire and Rescue Services personnel were removing uprooted trees from some of the arterial roads while privately engaged tree cutters were trying to remove obstacles on some of the smaller roads.

Neelakanthan Namboodiri in Kalady said his home had a miraculous escape as heavy wind uprooted several trees in his neighbourhood. He said several houses were damaged and power outage was reported from many areas. Nutmeg farmers along the Periyar were one of the worst hit. Hundreds of trees have been uprooted, said Mr. Namboodiri.

Councillor of ward 10 in Kalady panchayat Shahina Naushad said power failure was one of the biggest problems the panchayat faced on Tuesday as several trees fell across service lines and electric posts. She said there was no loss of human lives but several houses were damaged even as others saw miraculous escapes as trees collapsed close to them.

Sources in the Agriculture Department said farmers had been asked to report their losses. A first information report on the situation would be filed within 24 hours and that farmers would be able to file their applications for compensation through the AIMS portal of the State government within 10 days. Procedures of the department had been slightly delayed due to the power outage in panchayat, sources added. Places like Vengola, Ayavana, Kunnathunadu, Kothamangalam and Muvattupuzha also reported damage to crops.

Sources in the District Disaster Management Authority said that most of the damage had taken place in Paravur taluk. No loss of human life has been reported so far. The most affected panchayat was Alangad, they added.

A communication from the district administration said Alangad, Kottuvally and Karumalloor villages were the worst hit in the district. Forty houses were badly damaged in Kottuvally village while 102 were partially damaged. A total of 122 houses in Alangad village and 18 houses in Karumalloor village were damaged. The three villages in Paravur taluk have also suffered a loss of around ₹50 lakh from damage to standing crops.