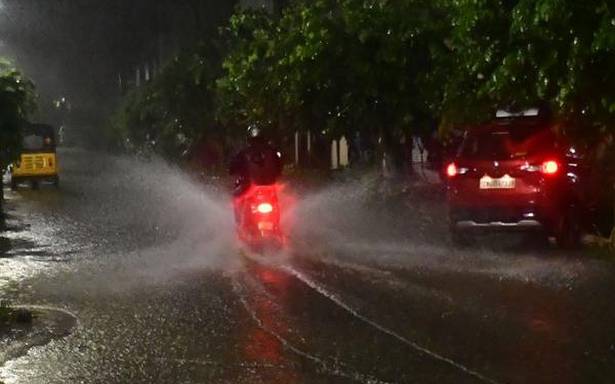 A holiday has been declared for schools and colleges in Tiruchi, Thanjavur, Tiruvarur, Nagapattinam, Mayiladuthurai, Perambalur, Pudukottai and Ariyalur districts in view of the rain.

Nagapattinam town took the brunt of the rain fury recording 171.20 mm of rainfall during the 24-hour period ending at 6:00 a.m. on Friday.

Most other parts of the central region, including Mayiladuthurai, Pudukottai and Tiruchi districts, received moderate to heavy rainfall. Farmers in the core delta districts, who were just recovering from the rain spell earlier this month, are keeping their fingers crossed on the fate of the standing samba/thaladi crop. They could have a tough time draining the water from the fields if the rains continue.

About 26,891 cusecs of surplus waters was being diverted in Kollidam river from Upper Anicut (Mukkombu) as the Mettur Dam is filled to the brim and 24,694 cusecs of surplus flows is being discharged from the reservoir as on Friday morning.

The Thuraiyur Big Tank in Tiruchi district was filled to brim after more than a decade. In Perambalur district, Collector P.Sri Venkada Priya has issued a flood warning to people living downstream of the Kottarai Marudaiyaru reservoir as about 3,500 cusecs of surplus waters was being discharged from the dam following heavy rain in its catchment areas.

A holiday has been declared for schools and colleges in Tiruchi, Thanjavur, Tiruvarur, Nagapattinam, Mayiladuthurai, Perambalur, Pudukottai and Ariyalur districts in view of the rain.