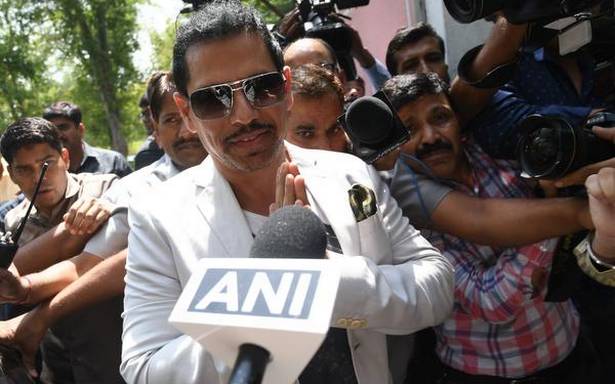 The Delhi High Court Friday granted three more weeks to businessman Robert Vadra to respond to the notices issued to him by the Income Tax (I-T) Department under the black money law.

The high court said the I-T Department can continue with the assessment proceedings, but no final order shall be passed by it.

A bench of Justices Rajiv Shakdher and Talwant Singh issued notice to the I-T Department and asked it to file within four weeks its response to Mr. Vadra’s petition challenging notices issued to him on December 4, 2018 and December 18, 2019 under Section 10 (1) of the Black Money Act, 2015.

The court listed the matter for further hearing on August 10.

Mr. Vadra, son-in-law of Congress chief Sonia Gandhi, sought to declare as illegal and unconstitutional the 2018 and 2019 notices as well as a show cause notice issued to him on May 7 this year as well as May 17 and May 22 letters being violative of Article 14, 19 and 21 of the Constitution.

Section 10 (1) of the Black Money (Undisclosed Foreign Income and Assets) Act, 2015 provides that the assessment officer, on receipt of information from income tax authority or any other authority, may serve a notice on any person requiring him on a specified date to produce such accounts or documents for the purposes of this Act.

The provision also empowers the officer to conclude the assessment ex-parte where the person to whom notice is served fails to comply with it.

Section 11 of the Act provides the time limit for completion of assessment as two years from the end of the financial year in which the notice under section 10(1) was issued.

Mr. Vadra alleged in his plea that the conduct of the authorities in issuing five communications to him is reflective of their mala fide attempt to pursue a political vendetta against him, his wife Priyanka Gandhi Vadra who is the General Secretary of Indian National Congress and his in-laws.

The Additional Commissioner of Income Tax, Central Range-VII has issued a notice to Mr. Vadra on December 8, 2018 under the Black Money Act alleging that he acquired beneficial interest or ownership in 2010 in the property at 12 Ellerton House, Bryanston Square in London, though its legal ownership was transferred in the name of Skylite Investment FZE, a company incorporated in the UAE.

The petition said it has been alleged by the department that from the analysis of certain e-mails that elaborate renovation works in the London property were being undertaken by arms dealer Sanjay Bhandari’s nephew Sumit Chadha under Mr. Vadra’s constant monitoring, instructions or directions and close supervision; therefore, the property was beneficially owned by the petitioner and was for his use and benefit.

Senior advocate Abhishek Manu Singhvi, representing Mr. Vadra, contended that the basis of the notices are documents of Bhandari, statement given by Manoj Arora, who is said to be Mr. Vadra’s close aide, and foreign enquiries and 18 e-mails.

He claimed that the department has not even supplied all documents to them and added that Mr. Vadra was not being given sufficient time to respond to the notices.

Solicitor General Tushar Mehta, representing the I-T Department, said it is not something which has happened suddenly and the first notice was issued to Mr. Vadra three years ago and the deadline to respond is May 31.

He said by saying that two days and three days are being given to respond to the reply, Mr. Vadra has tried to show that government is acting mala fide which is not correct and that the petitioner has sought 15 adjournments till now.

Mr. Mehta and Additional Solicitor General Balbir Singh said they have no objection if court grants further time to Mr. Vadra to file replies to the notices.

Mr. Singh submitted that under the law, a person is supposed to declare all assets he is holding since 2010, bank accounts and the assets abroad, failing which he is subjected to scrutiny.

Mr. Vadra said in the plea that under the provisions of the Black Money Act, in order to allege that a person is beneficial owner of a property, it is a mandatory and essential statutory pre-condition to establish that such an individual has provided (directly or indirectly) consideration for the assets for the immediate or future benefit of himself or any other person.

But, in this case, the notice did not even allege that the petitioner has provided, directly or indirectly, consideration for the London property, much less established the same.

Meanwhile, the high court listed for June 3, a batch of petitions by Congress leaders Sonia Gandhi, Rahul Gandhi and Priyanka Gandhi Vadra and others challenging the revenue department’s decision to transfer their I-T assessments from one section to another on the ground that their cases will be treated along with Sanjay Bhandari’s group.

The transfer of their cases to the Central Circle was opposed by the Gandhis on the ground that they have nothing to do with Bhandari group cases.

Mr. Mehta said they are in the process of filing reply which will be less on facts and more on law and the court may consider it on June 3.