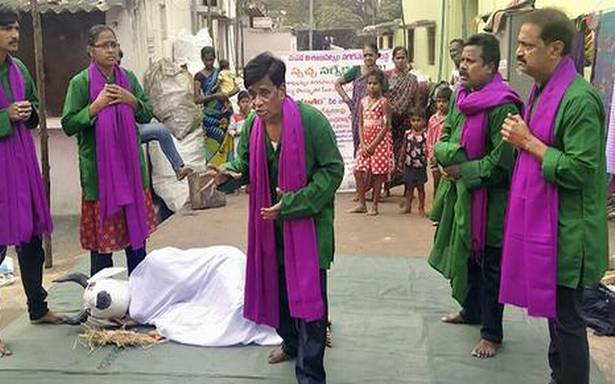 ‘Response from people is very good’

The Greater Visakhapatnam Municipal Corporation (GVMC), as part of Swachh Survekshan(SS) survey, has been organising street plays at various areas to create awareness among people on the growing plastic pollution in the city.

The artistes are also explaining about various components of SS-2021 during their play.

Chief Medical Officer K.S.L.G. Sastry said that apart from imposing fines on those vendors, who are using plastic covers of less than 50 microns thickness, the GVMC was also conducting awareness campaigns. The response to the street plays was good, he added.

“Even though there are no manufacturers of such plastic covers, we found that many vendors are procuring the banned products from Odisha. Through the street play, we are sending a clear message to the citizens that there are many alternatives to plastics. The artists are doing a good job explaining the environmental hazard being caused due to plastic pollution,” he added.

The GVMC is also organising some plays to create awareness on source segregation, cleanliness and a few components of the SS-2021.