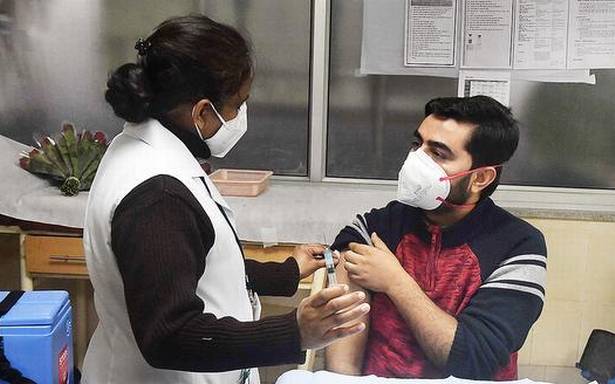 Tweaks in inoculation guidelines have made the process more flexible; senior doctors taking the jab has motivated others to follow suit

Less than two weeks into the COVID-19 vaccine drive, Delhi has managed to achieve 90% of its daily inoculation target and has also increased the number of vaccination sites and the daily target.

On January 16, Prime Minister Narendra Modi launched the vaccination drive across the country.

Only 45.5% of the expected number of healthcare workers in Delhi turned up to take the vaccine.

The spike in the number of people getting the jab is being attributed to increased confidence regarding the vaccine among healthcare workers, and changes to guidelines that make the process more flexible.

Awareness sessions and many senior doctors coming forward to take the vaccine have also made a difference, said heads of hospitals.

“On the first day, the number of healthcare workers who came to get vaccinated was in the 20s. More workers are willing to get the vaccine now. For every vaccine, the story is the same. People want to wait and see if there are any side effects and then the numbers pick up,” Medical Director of Lady Hardinge Medical College, N.N. Mathur told The Hindu.

Dr. Mathur said the Centre has also released posters with quotes of senior doctors, who have taken the vaccine, to instill confidence in healthcare workers.

“We have also asked people, who have taken the vaccine, to share their experience in our WhatsApp groups… they are doing it. We hope that more people will come forward to take the jab,” he added.

Dr. Mathur said he had taken the vaccine on the first day and motivated around 4,000 healthcare workers at the hospital.

“Their questions and doubts were addressed in these sessions. Also, many senior doctors, including me, have taken the vaccine,” she added.

Apart from these, two changes in guidelines have led to an increase in the number of recipients, said officials. Initially, each of the 81 sites here had a daily list of nearly 100 registered recipients. From January 28, the number of sites was increased to 106. This has led to the daily target being increased to 10,600 from the initial 8,100 health workers.

Earlier, only those on the list were allowed vaccination on the day. But last week, the Centre allowed healthcare workers — whose names are not on the daily list — but registered in the CoWIN platform, to be vaccinated.

This has led to more people getting vaccinated.

On the first day, 45 people were vaccinated at RGSSH but then the numbers dropped and have now picked up again, hitting 100 on multiple days.

“Workers from other private and smaller hospitals in our district, where vaccination has not begun, have been allowed to get the jab at our hospital or at GTB. This has helped increase number of people,” Dr. Gupta said.

Also, centres have been allowed to do more than 100 vaccinations if possible.

A 27-year-old nursing orderly at RGSSH, Mithlesh Kumar, said he had volunteered to take the vaccine on the first day.

“I wanted to be safe from the virus. But others were waiting for more people to take the vaccine so that they know it’s safe. In our hospital, some had a fever after taking the vaccine, but there were no major issues. Now, the fear in most people is gone and they are ready to take the vaccine,” he said.

A member of the AIIMS nurses’ union said there is still reluctance in some.

“Many did not want to take the risk after a security guard was hospitalised after taking the vaccine. The director of the hospital has taken the vaccine, but other senior doctors should also take it to instill confidence,” the member said.

Covaxin is used at eight of the 106 vaccination sites in the city, including AIIMS.

The beneficiary has to sign a consent form to take Covaxin, which is not needed for Covishield.

“The consent form states that the vaccine is in the trial phase and workers know that. But there is no coercion from the authorities, and it is happening as it should be done — voluntarily. It will take more time to instill confidence and many are saying that they may not take the vaccine as the cases are very low now,” the member added.

In the next phase, the front-line workers, including police and teachers, will be inoculated.

About 2.4 lakh healthcare workers, whose names have been registered with the government, are being vaccinated in the first phase.