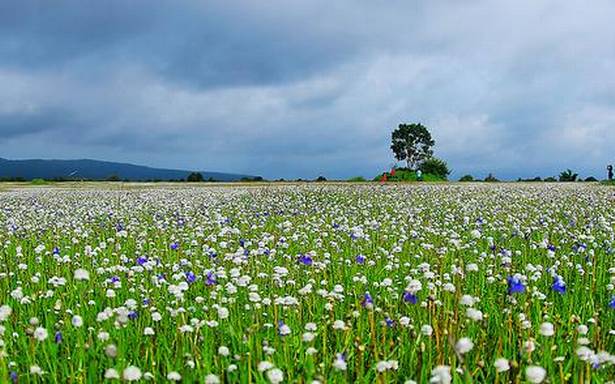 Panchayat project will destroy biodiversity and uniqueness of the area, say activists

The Madayipara Protection Committee has come out strongly against the decision of the local panchayat to beautify the Madayipara hillock and to put up street lamps along the road passing through the area.

K.V. Chandramgadan, secretary of the committee, said that Madayipara was an ecological niche and the move to beautify the area and put up street lamps would destroy the natural character of the place.

The large laterite hillock, its biodiversity, and the silent environment in the night enhanced the beauty of the place, he said.

It needed no beautification and any changes would only destroy the hillock, he said.

Mr. Chandramgadan said that the hillock attracted migratory birds, which flew in from far-off places and bred here. The rich ecology and biodiversity supported rare butterflies, insects, and plants. This made the place unique, he said.

At night, there were only very few pedestrians who walked through the pitch dark roads passing through the hillock. Street lights would encourage more people to visit the place during the night and they may pollute the place by leaving back food waste and garbage.

He said that instead of setting up street lights that would cost a huge amount to the panchayat, it should spend the funds to set up CCTVs to monitor antisocial activities and to check pollution of the place.

Mr. Chandramgadan said that the Madayipara hillock was facing threats from encroachers, private institutions, and pollution caused by visitors.

The committee was constantly campaigning and raising awareness against these, he said.

When contacted, Madayi panchayat president Saheed Kayikaran said that the local body had decided to set up only low beam lights in the area. However, some were trying to misguide the people by stating that the panchayat was planning to erect high beam lights and street lights.

He said that no government authority had declared Madayipara as a biodiversity hub or a protected area.