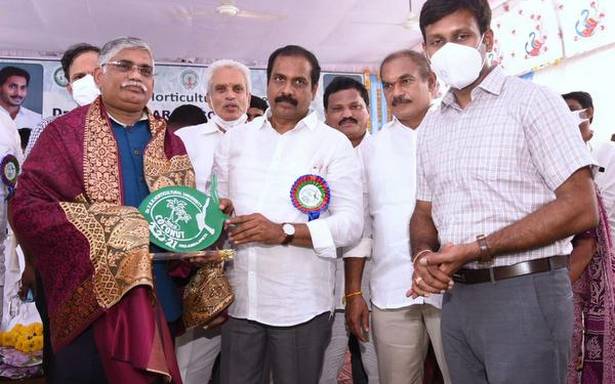 Horticulture Dept. to take up survey to identify suitable locations for farming

Agriculture Minister Kurasala Kannababu on Tuesday directed scientists and horticulture authorities to prepare a five-year plan to revive coconut farming in the Konaseema region of the district, finding timely solutions to the existing challenges, including the white fly disease.

Mr. Kannababu told the gathering that the State government would unveil the five-year plan as early as possible. The scientists and officials would prepare a plan for intercrops to be grown in coconut orchards.

Mr. Kannababu announced that the Department of Horticulture would take up a field survey across the State to identify suitable locations to be mapped for coconut cultivation. The total area under coconut cultivation in the State was more than 1.5 lakh hectares, of which more than 54,000 hectares was in the Konaseema region comprising 16 mandals.

Dr. Y.S.R. Horticulture University Vice-Chancellor T. Janaki Ram, HRS principal scientist Bhagavan and other scientists said they would come out with a permanent solution to the white fly disease and strive to encourage inter-crops in coconut orchards.

The HRS recently signed a Memorandum of Understanding with the Central Plantation Crops Research Institute (CPCRI-Kasargod) to revive coconut cultivation in the Konaseema region.

Collector Ch. Hari Kiran said a three-member committee had been constituted to study the impact of onshore oil exploration operations on the coconut orchards in the Konaseema region.