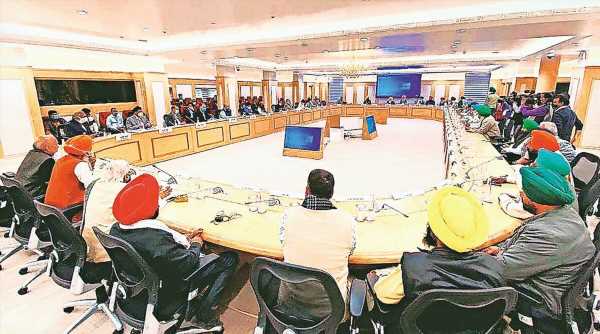 * October 14, 2020: Union Agriculture Secretary Sanjay Agarwal invited representatives of 29 protesting farm unions to Delhi and held the first round of talks at Krishi Bhawan. The farm union leaders said Tomar should attend the meeting, and tore copies of the Bill outside Krishi Bhawan.

* November 13, 2020: The eight-hour-long marathon meeting between the ministerial committee and the farm union leaders remained inconclusive.

* December 1, 2020: Moving to resolve the standoff with farmers protesting at the gates of Delhi, the Centre opened talks with farmer representatives, who did not warm up to its suggestion of forming a committee to look into their demands.

* December 3, 2020: The government offered to reconsider provisions of the new farm laws, but the farmer leaders stuck to their demand for repealing all three laws. The talks ended inconclusively, but both sides agreed to meet again on December 5.

* December 5, 2020: The government again offered to amend some provisions, but the unions stuck to their demand for repeal. The government sought time to prepare a concrete proposal and provide a point-by-point written response to issues raised by the unions.

* December 8, 2020: Home Minister Amit Shah met 13 representatives of farm unions. A day later, the government offered significant concessions, including a written assurance on continuation of MSP-based procurement, ensuring parity in transactions inside and outside existing Agricultural Produce Market Committee (APMC) mandis. The farmer unions rejected the proposals, several of which would require amending the new laws.

* December 30, 2020: Both sides indicated softening of stand during the four-and-a-half hour long meeting. “Mutual consensus” emerged on two demands of farmers — excluding farmers from the ambit of The Commission for Air Quality Management in National Capital Region and Adjoining Areas Ordinance 2020, and dropping provisions of the draft Electricity Amendment Bill, 2020, which are intended to change the existing mode of subsidy payment to consumers. Farmers had proposed a four-point agenda for the meeting; both sides agreed to discuss the two remaining items at the next meeting.

* January 4, 2021: No consensus emerged on two key demands of farmers — repeal of laws and legal guarantee for a higher MSP.

* January 15, 2021: Talks were inconclusive, but both sides agreed to meet again. “It was a cordial meeting with farmer unions. All the three laws were discussed… I hope that unions will take forward the talks based on today’s discussions,” said Tomar.

Tomar said 11 rounds of talks had been held so far, together stretching for over 45 hours. “While dignity was maintained during the talks, a sense to take a decision in the interest of farmers was lacking… When the sanctity of a movement is destroyed, then no decision can be reached… Therefore, the talks could not reach a decision. I also regret it,” he said.