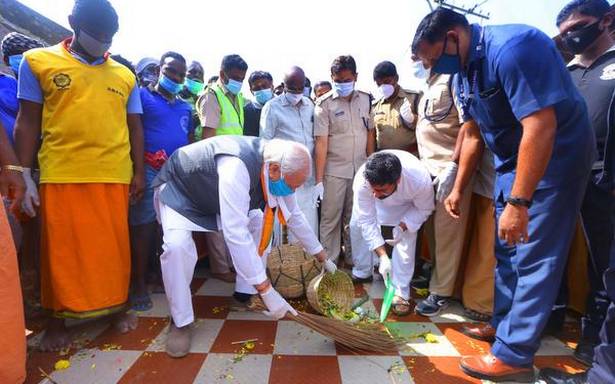 In a major boost to the Punyam Poongavanam project in Sabarimala, Governor Arif Mohammed Khan took part in the cleanliness drive at Sannidhanam on Monday .

After offering prayers at the Ayyappa temple in the morning, Mr.Khan along with his son Kabir Arif engaged in clearing the waste along with the other volunteers and employees of the Travancore Devaswom Board (TDB).

Later, the Governor also visited the project office of Punyam Poongavanam at Sannidhanam and planted a sandalwood sapling near the Manimandapam in the premises of the Malikappuram Devi temple. Prior to leaving Sannidhanam by 9.50 a.m., he also conveyed his regards to the TDB and its employees. The TDB staff led by its president N.Vasu were present.

Carrying an Irumudikkettu on his shoulders, Mr.Khan ascended the holy hillock on Sunday evening and after offering darshan at the Ayyappa temple and associated shrines, he stayed overnight at a Guest House in Sannidhanam.

While returning from Sabarimala, the Governor also called on the former Supreme Court judge M. Fathima Beevi. The visit lasted about half an hour.

According to Mr. Khan, the visit was made as a mark of respect to Ms. Beevi, who was the first women judge of the Supreme Court.