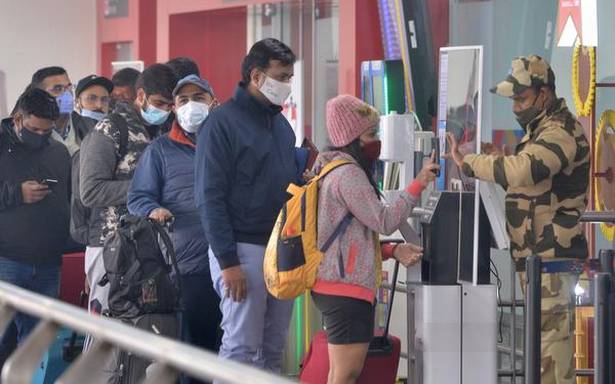 Several embassies have written to MEA, Ministry of Civil Aviation for an end ‘unfair’ system

With airfares for returning students and family members from Europe and North America doubling and even quadrupling this winter, and permitted flights from a limited 28 countries running packed, the government is facing pressure from many quarters. including foreign embassies and the tourism industry, to restore regular international travel that had been cancelled due to the COVID pandemic in March 2020.

Diplomatic sources told The Hindu that a number of embassies have written to the Ministry of External Affairs and Ministry of Civil Aviation demanding an end to what they see as an “unfair” system, where only those countries that the government has chosen to sign “air travel bubble” agreements with are able to run flights, and even those are limited according to the government’s reciprocal agreements.

In addition, the agreements are meant to be only “end to end”, i.e. not valid for onward travel to a third country, meaning that travellers often have to break their journeys at multiple points to travel to a destination to which India doesn’t permit a direct flight. At a recent event organised by a Delhi based think-tank, Minister of Civil Aviation Jyotiraditya Scindia faced a number of questions from ambassadors and high commissioners on the issue, and was “besieged” by requests to normalise air flights to pre-COVID levels, according to attendees.

“There is a general feeling that air bubbles have dragged on for far too long. International flights could reopen in December-January. The thinking in the government has changed recently as COVID cases are on the wane," one official told The Hindu, conceding that the government is now feeling the pressure to reconsider its policy.

With nearly 100 countries now accepting Indians vaccinated with WHO-approved vaccines like Covishield and Covaxin, travel agents and airlines are also asking why India is not rationalising flights, even suggesting that the government is holding out for renegotiating its air service agreements.

“The so-called bubbles, I don’t really think are driven by COVID. Because we’ve heard of the desire on the part of the Indian Government to renegotiate their air service agreements. I think COVID is being used to mask a different issue,” International Air Transport Association (IATA) President Willie Walsh said at a press conference in Geneva earlier this month.

The Ministry of Civil Aviation and the Ministry of External Affairs did not respond to requests for a comment on the allegations. However, The Hindu spoke to a number of officials who accepted that the issue over air travel bubbles was growing, especially as more travellers seek to visit India from countries that used to fly directly to India, but aren’t at present.

This has particularly hit European countries, who served as hubs for travel to India. Switzerland, for example, had approached the government to restart direct flights of the Swiss International Airlines in February 2021, and opened up to fully vaccinated Indians in June, but no permissions have come through yet. A Chennai-Zurich ticket could now cost a traveller a whopping ₹2.75 lakhs. Flights from the U.S. and Canada cost more than ₹1lakh one-way, while some European passengers have to break journey in two places to travel to India.

Turkish Airlines, one of the more popular airlines with more than 200 flights to 90 countries, has had no flights to India for 20 months, and the Polish airline LOT, that inaugurated its first flight in September 2019 with much fanfare, has not been able to run flights since March 2020 as well, despite several reminders from embassies of both countries to the government.

“What makes it particularly unfair is that the bubbles are being run under the COVID pretext, and the agreements say they are meant only to evacuate stranded passengers, and only to a single country,” adiplomat who didn’t want to be identified, told The Hindu, pointing out that most airlines were violating that stipulation.

According to an aviation industry source, the bubbles also “favour” Gulf-country carriers, which have now become practically “national carriers for India”. Only four European countries including the United Kingdom have bubble agreements with India, and operate around 42 flights between India and Europe per week. In contrast, India has agreements with five West Asian (Gulf) countries, and Qatar Airways, Emirates and Etihad (UAE) alone operate 185 flights to India, the source said.

In response to questions on why requests from several countries to set up air bubbles were not being considered, officials of the Ministry of Civil Aviation said the COVID situation was the first concern, followed by the “capacity of Indian carriers and whether our airlines want to fly to these destinations or not.”

“If you cap the limit of foreign carriers according to the capacity of Indian carriers, the Indian market is never going to be serviced. You don’t have an Indian carrier with 1,500 widebodies [aircraft] to service the demand for international travel from and to India. This will take India back to the 90s,” an aviation veteran pointed out.