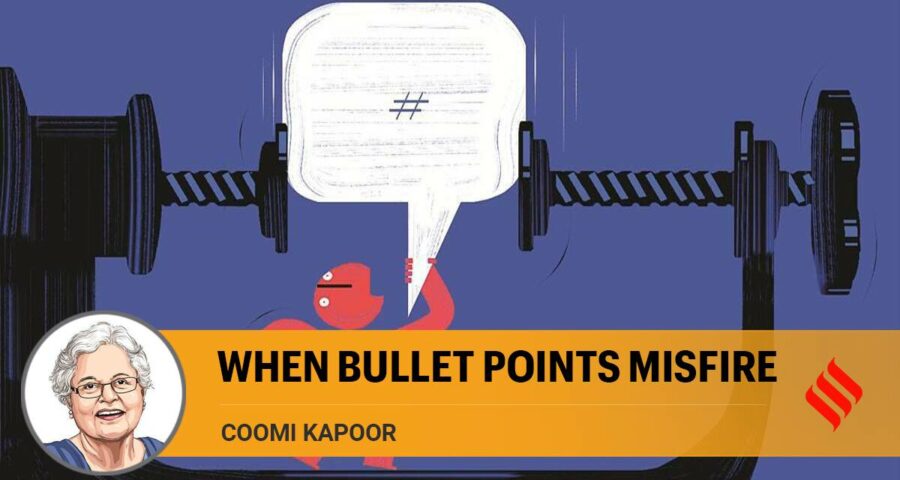 Government's sledgehammer tactics in dealing with media and criticism could well be self-defeating. I wonder at times whether those at the top of the ruling establishment, even after seven years in power, are aware that their PR managers’ strident, sledgehammer tactics in trying to ensure good publicity end up doing far more harm than good. The danger of vindictive, punitive over-reactions is that they can backfire, leaving a negative impression, not just at home, but abroad as well, where India’s ranking as a genuine democracy with a vibrant free press has taken a hit in recent months. The remedy of a negative press, perhaps, lies not in abusing the credibility of the rating agencies but introspecting. Not bashing the messenger but altering the message.

Dispatching a police notice followed by police teams visiting empty offices of Twitter, simply because Twitter put an adverse tag on some tweets by ruling party members, is one such recent example. Whether the government was in the right or wrong in its spat with the Congress over the authenticity of the toolkit controversy, the optics of the subsequent attempts to pressure a global social media platform was far more damaging.

Between January and June 2020, the government made an unprecedented 2,367 requests to Twitter for disclosing the identity of those writing what it believed were objectionable messages and posts. The Information and Technology Rules, which were revised in February, decree that the government is entitled to details of those sending “unlawful messages” over the internet, surely a negation of the constitutional right to privacy and freedom of expression. The Facebook-owned chat messenger, WhatsApp, has now challenged the government in court over the sinister new regulations, which came into force a few days ago. The website believes that the new rules could be misused to muzzle dissent.

The usual justification given for violating a citizen’s privacy is “national security’’. Unfortunately, governments tend to interpret the vague, all-encompassing term for self-serving purposes. For instance, slapping colonial-era sedition laws against journalists for momentarily misreporting that an agitating farmer on Republic Day had been felled by a police bullet. Sending an Enforcement Directorate team to the office of a news-related internet portal whose views are not in conformity with the government smacks of Emergency-style tactics. Those disagreeing with the official narrative are dubbed anti-national for tarnishing the country’s image. It seems almost every debate, from public health to economics, is reduced to pro or anti-India.

My experience has been that the more strong and stable a government, such as the Indira Gandhi and Rajiv Gandhi regimes earlier, the more authoritarian its media handlers. Shaky coalition governments, whether of Atal Bihari Vajpayee or P V Narasimha Rao, were far more tolerant, taking criticism in their stride.

Belonging to the old school, I, personally, believe that amiability and accommodation, and having broad enough shoulders to take criticism on the chin, make for better media relations than throwing your weight around. A well-argued counter is far more effective than a dictatorial “off with his head’’ approach.

Sharda Prasad, Indira Gandhi’s erudite and gentlemanly press officer whom Rajiv Gandhi inherited, I always felt, was a worthy example for emulation by those who sit in his chair now. When I first met him I was working in a newspaper perceived as hostile to the government. Regardless, he was always accessible and polite and assured me that his job was to encourage transparency and promote a healthy public dialogue. (Unfortunately, Prasad had little say in the PMO by the time I met him.)

Prasad’s approach was also followed by the late Arun Jaitley as Information and Broadcasting minister in Modi 1.0. Jaitley was good friends with journalists from across the entire political spectrum. Perhaps this contributed in part to the fact that the prime minister in his first term certainly enjoyed better media relations, both at home and abroad, than he does now. Many in the party would mock Jaitley for this quality of his which was an asset, especially in times of crisis.

In Modi 2.0, the guiding principle for the PM’s media cell and the BJP IT cell seems to be completely adversarial, the motto being either you are with me or against me.

Every critique is seen as a political attack by those who either cannot win elections or the unelected. So, a media that asks questions or is critical, NGOs and campuses, civil society, artists are all seen as political rivals in a coalition of losers.

A civilised conversation between differing points of view is, therefore, no longer possible in such a polarised environment. Perhaps, this is partly because those now in charge of handling the media, both in the government and the party, were neither journalists to start with nor have any experience dealing with journalists. Most of them are IT and industry experts, with no political sensibilities, who short-sightedly judge success or failure in terms of the numbers in their support on social media or how many did they bully into toeing their line. For them, which hashtag is trending becomes an important metric and that’s why they have little understanding of why abusing the foreign press — be it in the 1970s or last week — is silly and counterproductive. They believe their task is to set the narrative and give bullet points to the media, large sections of which do a cut and paste.

Similarly, the party’s IT cell dominates the narrative more than political leaders. IT cell operatives have neither any sense of history nor politics, their rebuttals and counters are harsh and abusive, instantly magnified by their army of trolls. So strong is the BJP IT cell’s dominance that some usually soft-spoken central ministers are seen tweeting in uncharacteristically harsh, offensive language about their political foes. Every day becomes an election campaign day. The sometimes crude and inappropriate language of campaign rhetoric, described by TMC MP Mohua Moitra as street-level abuse, does not seem to have impressed the Bengal voter. The party and the government need to realise that being in power, now that they are entering its eighth year, they have to grow a thicker skin, otherwise this spiral into abuse and intimidation will spread like an infection.

This column first appeared in the print edition on May 31, 2021, under the title ‘When bullet points misfire’. The writer is consulting editor, The Indian Express, and author of The Emergency, A Personal History