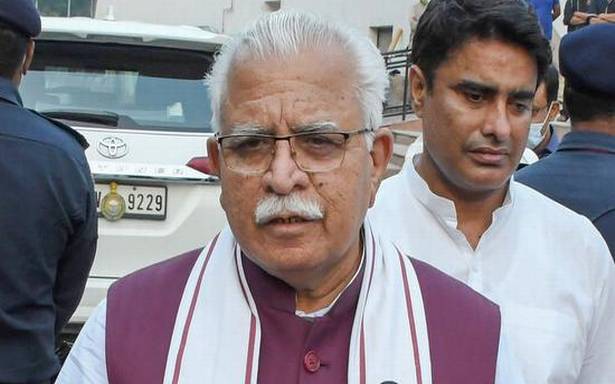 The decision to repeal farm laws was not taken overnight, says Haryana CM

Haryana Chief Minister Manohar Lal Khattar on Friday said the decision to repeal the three farm laws was not taken “overnight” and linking it to elections was not justified.

Mr. Lal was addressing a press conference here. “This decision was not taken overnight. Talks have been going on for a long time and a lot of effort has been put in for this. Linking this decision with elections is not logical or justified. Elections come and go,” he said to a question.

“By taking this decision, the Prime Minister has certainly shown a big heart. He has once again proved that he is a common man’s leader. The Government has always taken steps in the interest of the farmers. In Haryana, for example, various steps have been taken for the welfare of farmers. Be it ensuring water to every tail-end, procurement of crops at the Minimum Support Price, implementation of water conservation schemes, increasing compensation amount of damaged crops, or setting up soil testing labs, Haryana has certainly set an example for other States in taking various farmer-friendly decisions,” he said.

Mr. Lal said that the decision of the Prime Minister showed that keeping the interest of the public is paramount for him (Mr. Modi).

“Haryana has faced a major impact from this agitation, and during this one year, I have held various meetings with the Prime Minister, senior leaders, and even with farmer unions. As many as 11 formal meetings were held with the farmers on this issue, along with many informal meetings for sharing their message with the Centre. I think the effort put in by us has also played an important role in the decision taken by the Prime Minister,” Mr. Lal said.

The Leader of the Opposition in the Haryana Assembly Bhupinder Singh Hooda welcomed the decision and demanded that the government deliberate on the “remaining issues of farmers” as well. Mr. Hooda reiterated his demand that all the cases filed against farmers during the agitation should be withdrawn by the government.

“The government should also come forward to help families of farmers who were martyred during the movement, the way the Congress government of Punjab has given financial help and government jobs to the families of the victims,” he said.