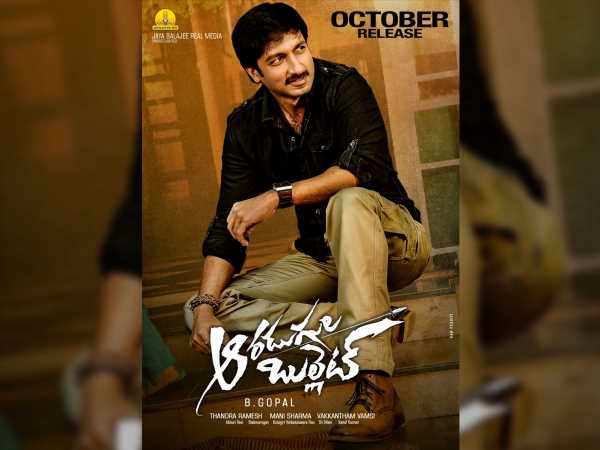 Tollywood macho star Gopichand is currently basking in the glory of his recently released sport based movie Seetimaarr, which was released on 10th September. The movie which has Tamannah Bhatia  and helmed by Sampath Nandi is doing decent collections at the box office.  Gopichand starrer Seetimaarr, has helped his long-delayed film, Aaradugula Bullet, to see the light of day. Lying  After nearly seven years, the film is finally gearing up for its theatrical release in  the month of October. The exact date of Aaradugula Bullet’ release will be announced soon.

Aaradugula Bullet has lady superstar Nayanthara in the female lead role. Gopichand starrer is  directed by B Gopal and is bankrolled by Thandra Ramesh under the banner of Jaya Balaji Real Media whereas Mani Sharma is the music director.  It’s production started in  the year 2012 with Boopathy Pandian as a director under the title Jagan Mohan IPS however he left this action entertainer  due to disagreements over the script. His replacement was B  Gopal who directed Gopichand starrer based on the story of Vakkantham Vamsi.

Gopichand and Nayanthara starrer Aaradugula Bullet has the music by Mani Sharma. The makers are planning to start the promotional activities  of this action drama very soon.