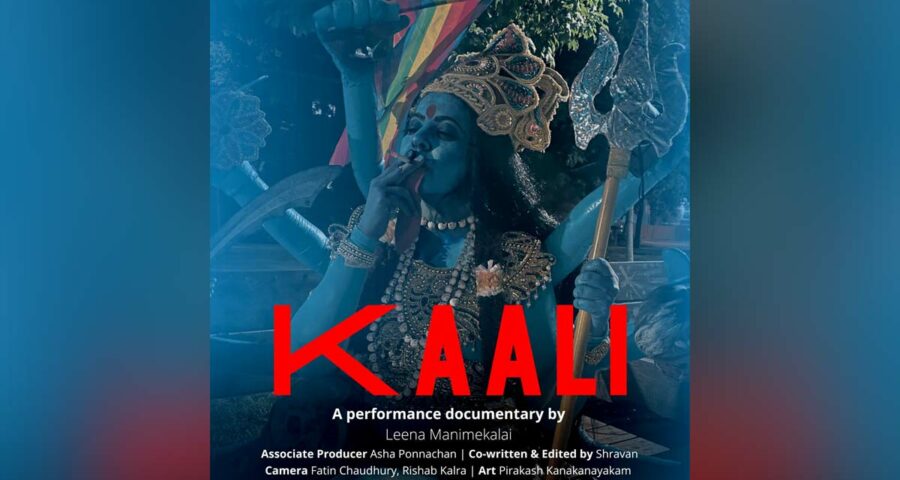 A documentary film’s poster, helmed by Indian filmmaker Leena Manimekalai, has sparked outrage for hurting Hindu sentiments with its depiction of Goddess Kali. Leena recently  took to social media and shared the poster for her upcoming documentary film on social media.  The poster features a woman dressed as a Hindu Goddess. In the photograph, Goddess Kaali is seen smoking a cigarette. The LGBT community’s pride flag is also seen in the background.  The netizens are fired on Leena Manimekalai and they alleged that  Leena Manimekalai hurt the religious sentiments through the depiction of the goddess, and they  are demanding that the poster be withdrawn. The hashtag ‘ArrestLeenaManimekalai’ is also trending on Twitter. Few comments by the netizens are as follows:

Tushar: Content to be liable for banning even if seen potentially, remotely hurting religious sentiments of other religions but showing Maa Kaali smoking is allowed. Seriously, how could people take so much creative liberty on Hinduism? #ArrestLeenaManimekalai

Red Chill: Shameful,after all,they do not get any subject to show their creativity,and even if they get it hurting Hindu sentiments,there are other religions in the country too,do such artists have to be separated from their heads?Feel scared #ArrestLeenaManimekalai #ArrestTasleemRahmani

Renee Lynn:Despicable..! Don’t let them get away with mocking Hindu Gods. If insulting Hindus Gods come under freedom of expression then why not insulting Mohammed? What bigotry. Hindus get beheaded for quoting directly from Quran. Fight like hell Hindus..! ENOUGH #ArrestLeenaManimekalai

Today a Delhi-based lawyer  also filed a police complaint and alleged that the director Leena Manimekalai has hurt religious sentiments by allegedly insulting the Hindu goddess.