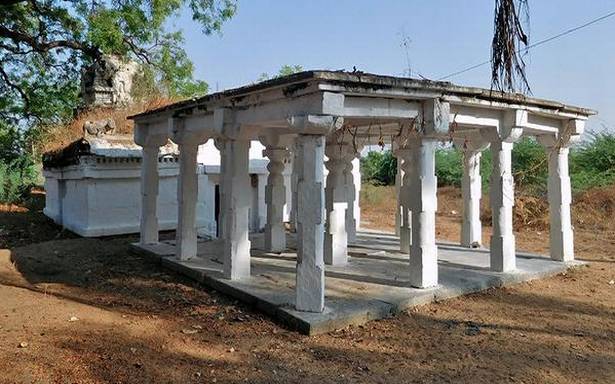 The presiding deity is seen in a yogic posture

The temple dedicated to Lord Rama at Peddaputha village in Valluru mandal is unique in its own right. Apart from its architectural grandeur, the temple, dating to the Vijayanagara period in 1400 CE, has the idol of the presiding deity seated in a yogic posture, which is a rarity.

The idols of Lord Rama carrying bow and arrow is common. However, the idol in this temple does not have these weapons. The Lord is seen sitting in ‘Padmasana’, with his right hand in ‘Chinmudra’.

In yoga, ‘Chinmudra’ is considered as a posture in which the practitioner holds the hand close to heart, palm closed, thumb and forefinger brought together. The left hand of the idol is seen touching the ground in ‘Bhumisparsha mudra’.

Goddess Sita sits to the left of Lord Rama, holding a lotus; while Lord Lakshmana, carrying his bow and arrows, stands to the right of the presiding deity.

Lord Anjaneya is seen sitting in front of the Lord Rama in reading posture, referring to the ‘Brahma Sutra’ inscribed on palm leaves.

“The idols symbolically show that Lord Rama is keenly listening to the Vedic recital by Lord Hanuman,” explains V. Ramabrahmam, an academician at the Department of History and Archaeology of the Yogi Vemana University, Kadapa.

Similar iconography can be found in Singanamala in Anantapur district and also at the 500-year-old temple at Nedungunam, 24 km south of Vandavasi town on Kanchipuram-Chetput route in Tamil Nadu, at the foot of Dheergajala mountain.

Yet, the temple at Peddaputha village is in ruins and hardly known to people. The shrine used to be in a dilapidated condition for over three decades, but after its takeover by the Endowments Department last month, a glimmer of hope has emerged among the devout as well as the archaeologists that it would be revived.

“This is not enough. The State or Central archaeology departments should consider taking over this temple for preservation,” says Mr. Ramabrahmam.