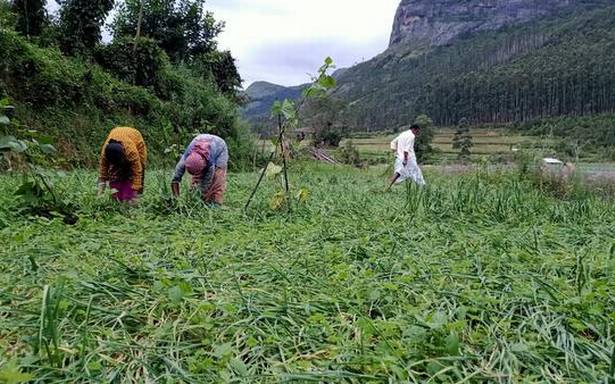 Crops aimed at Onam market damaged as farms got waterlogged

Vast areas of garlic cultivation aimed at the Onam market were damaged in the recent rain and gusty winds in Kanthallur. As per initial estimates, garlic in over 100 acres was damaged in the farms at Puthur, Perumala, and Keezhanthur at Kanthallur.

The cool-season vegetable cultivating villages of Kanthallur and Vattavada are the only places in the State where garlic is commercially cultivated. Though small in size, garlic traditionally cultivated here is known for its quality and efforts are on to get the GI (geological indication) tag for it.

Garlic cultivation is popular here as it fetches ₹150 to ₹200 a kg for farmers and ayurveda companies are the main buyers.

It is estimated that nearly 75% of the farming area is now under garlic for the first cropping season in August/ September. Compared to other crops, the cost of cultivating garlic is high.

Farmers say they had to pay thrice the normal price for seeds brought from Tamil Nadu during the lockdown period.

Sundaram, a farmer, says his cultivation in Puthur was fully damaged after the farm got waterlogged. The crop has started to decay and is of no use as the plants have swayed.

He says many farmers like him could not even sell their produce properly due to the pandemic situation last season. They have also purchased seeds at a higher price as there were restrictions on moving to Tamil Nadu for purchasing seeds.

Sivadasan, another farmer, says he had sown seeds with great expectations as he did not cultivate garlic for the last two seasons. His cultivation in nearly 30 cents have gone waste with the crop getting damaged in the rain.

An official of the Agriculture Department says many farmers at Kanthallur have turned to garlic cultivation as it is more profitable if the prices and weather conditions are favourable.

There are only small and medium farmers having a land area of 30 cents to 3 acres in both the villages. In addition to garlic, potato, beans, carrot, beetroot, and cabbage are also cultivated at Vattavada and Kanthallur.