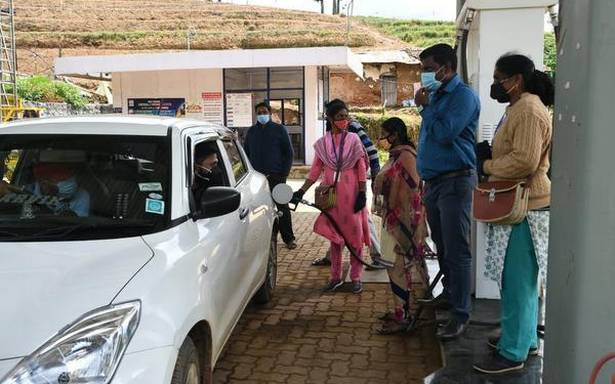 Known as the Tribal Research Centre Fuel Station in Muthorai Palada, the enterprise has hired members of the Irula, Kurumba, Toda and Kota tribal groups

A fuelling station set up by the Tribal Research Centre (TRC) in Muthorai Palada near Udhagamandalam is helping to provide livelihoods to support six Adivasi families in the Nilgiris.

Known as the Tribal Research Centre Fuel Station, the enterprise hires only members of the Adivasi communities from the Nilgiris to man the fuel pumps.

S. Udhayakumar, director (in-charge), TRC in Udhagamandalam, told The Hindu that the initiative was aimed at providing livelihoods for vulnerable members of Adivasi communities in the Nilgiris. “Most staff employed at the fuel station are women, while some are also living with disabilities. The list of people who were to be employed was decided by the district collector, J. Innocent Divya, who came up with the list based on the economic background of the applicants,” said Dr. Udhayakumar.

Members of the Irula, Kurumba, Toda and Kota tribal groups have been employed at the fuelling station. Each of the members receives a salary of ₹8,500 per month, which has helped support their families.

Uma, a Kurumba woman employed at the fuel station said that the salary from her job at the fuelling station had helped her through the COVID-19 pandemic. “We started working here only from March of this year. We bore the brunt of the pandemic last year, due to not being able to find any work. This job has definitely helped us through the lockdown this year,” she said.

S. Ragavendran, a member of the Kota community who works as a manager at the station, said that there were people who were working there coming from far-off villages like Karikiyoor in Kil Kotagiri. “The TRC even provides living quarters to these women, so that they don’t have to commute from their villages to Muthorai Palada every day,” he said.

“The fuelling station is also ideally located, as people living in the area would otherwise have to travel all the way to Udhagamandalam town, a distance of around 10 km, to fill up on petrol and diesel,” he added.