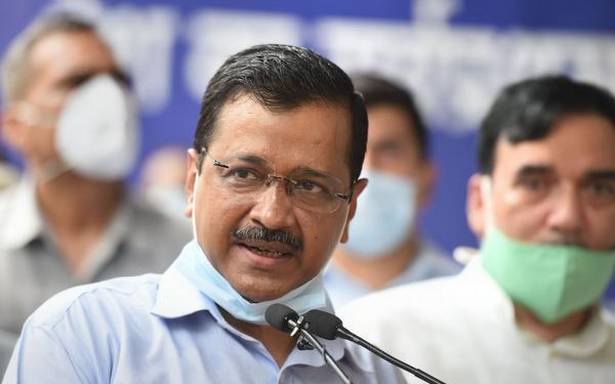 “Punjab is a border state. If any statement is to be given then it should be given responsibly.”

From Kashmir to Kanyakumari, India is one, Delhi Chief Minister and AAP National Convener Arvind Kejriwal said on Thursday and disapproved of the recent controversial remarks made by two advisers of Punjab Congress chief Navjot Singh Sidhu.

Talking to the media in Gurdaspur, Mr. Kejriwal said he had heard some statements on Kashmir and the country in the past one or two days.

"I believe that from Kashmir to Kanyakumari, India is one. Nobody can separate us. Such statements are not right," he said, without directly referring to Mr. Sidhu’s advisers.

"Punjab is a border state. If any statement is to be given then it should be given responsibly,” Mr. Kejriwal said, adding, “We do not want to do politics over such issues.” The controversial remarks by Mr. Sidhu’s two advisers – Malvinder Singh Mali and Pyare Lal Garg – on sensitive issues like Kashmir and Pakistan came under sharp criticism from within the Congress and the Opposition.

In a social media post, Mali had waded into the issue of revocation of Article 370 of the Constitution, which gave special status to the erstwhile state of Jammu and Kashmir.

He had reportedly said if Kashmir was a part of India, then what was the need to have Articles 370 and 35A. He had also said, “Kashmir is a country of Kashmiri people." Mr. Kejriwal was in Gurdaspur on Thursday for inducting former Punjab minister Sewa Singh Sekhwan into the Aam Aadmi Party (AAP).