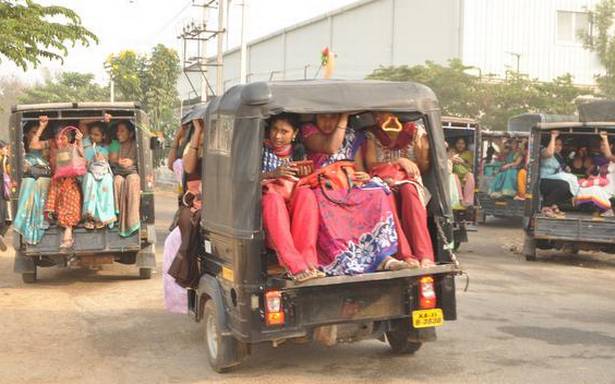 “Vanitha Sangathi”, a free monthly bus pass initiative to the garment workers by the Bangalore Metropolitan Transport Corporation (BMTC), has received poor response in the first month of its launch. There are over 800 garment factories in the city, but only one factory has come forward to provide free bus passes to 15 of its employees by agreeing to share the cost. When the scheme was announced, the BMTC had estimated that around 3 lakh workers would benefit from the scheme.

In December, the BMTC had requested the workers to submit their applications to their respective managements. The management in turn are to compile the list of beneficiaries and submit it to the Karnataka Labour Board . After verification, the Board will ask the BMTC to initiate process to issue the passes. The BMTC will issue the pass after receiving confirmation from the Board that the owners have paid their share to issue free passes.

As per the policy decision, the garment factories and the state government would cover 40% each of the cost and the BMTC, 20%. An ordinary monthly bus pass costs ₹1,050.

A BMTC official said, “Only one garment factory has come forward by paying the required amount to issue the passes to 15 of its women employees. Considering the lukewarm response, BMTC officials are visiting garment factories and encouraging the managements to take part in the scheme. We are hoping that in the coming months, more garment workers would take part in the initiative.”

Jayaram K. R., legal advisor of theGarments and Textile Workers Union, accused the authorities of introducing a flawed process to issue the free passes. “The initiative has failed because the authorities are asking the garment factory managements to submit the list of beneficiaries. Instead, they should have asked the women employees to submit applications directly by providing their details, including Aadhaar card, ESI, and others, to the Board. After verifying it with the managements concerned and receiving their share, passes should have been issued to the beneficiaries. If you entrust the responsibility to the managements, poor women workers will not get benefitted,“ he said.

Providing a free monthly bus pass would be a huge relief for garment workers as buying a pass adds to their financial burden. Prathibha R., president of the Union said, “In the city, garment workers cannot afford city bus travel. We have been hearing about this scheme for six years. Finally, it was launched, but failed to take off. The government expecting garment managements to share 40% of the cost – that is₹ 400 per worker – is also one of the reasons why it is not benefiting the needy.The garment workers are not in a position to question why their managementis not paying for the free passes.”

Ms. Prathibha added that the initiative is unlikely to benefit a majority of the garment workers in the city. “In the city, a majority of the garment workers rent houses near their factories and walk to their workplace.Many rely on other modes of transport such as autorickshaws by paying a fixed amount per month. The city buses cannot drop them at the doorstep of the factory asthey are located in interior parts of the city. The free bus pass facility is likely to benefit those who are working in the outskirts of the city.”