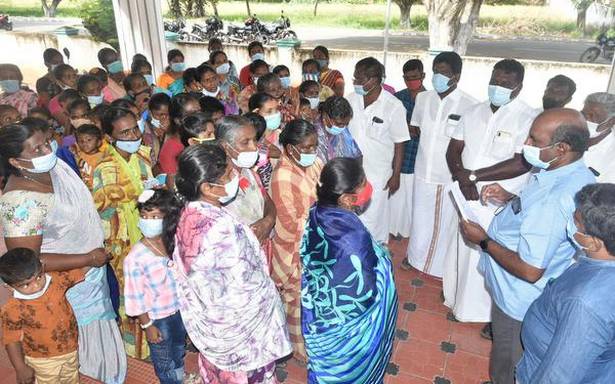 A large number of women and children from fishing community in Rameswaram, Mandapam and Thangachimadam on Monday staged a demonstration in front of the office of the Deputy Director (Fisheries) demanding the intervention of the Centre and the State government in securing the release fishermen arrested by Sri Lankan Navy in December last..

The agitators squatted before the office and demanded that their woes be taken to higher officials.

Speaking to reporters, Selva Mary, mother of a fisherman jailed in the island nation, said they have not had proper sleep since the day they got information that their near and dear ones had been jailed. There was lack of information as well from the governments. “We are really upset and worried about them,” she wept.

A fishermen association leader, Jesu Raja, said that on January 5, 13 fishermen out of the 68 were released by the Sri Lankan government. Of the 12 fishermen who were ready to leave for home, three tested positive for COViD-19. Hence, only nine fishermen arrived here.

Further, the government had promised to ensure safe release of the remaining jailed fishermen before Pongal. “We want our vessels also to be released by then so that the fishermen can go back to fishing,” Mr Jesu Raja said.

Fisheries Deputy Director Kathavarayan assured the fishermen and their families that they would convey their apprehensions to higher officials in the State government.

Meanwhile, former Sri Lankan Minister Senthil Thondaiman, who was in Sivaganga to oversee the training being given to bulls ahead of the jallikattu at Pattamangalam near Thirupathur, told reporters that the Sri Lankan government was friendly with India and the bondage was natural.

On the fishermen issue, Mr Thondaiman suggested that strict surveillance by the Indian Coast Guard along the IMBL should solve the row amicably. If the fishermen were guided to engage in fishing only in their waters, the Sri Lankan Navy would not arrest them.