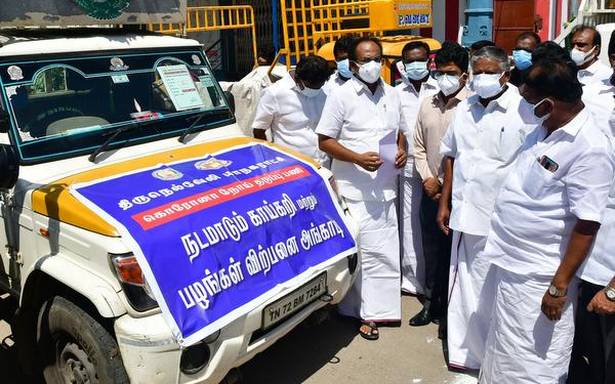 “They will reach Tamil Nadu within a couple of days,” Minister for Industries Thangam Thennarasu said after inaugurating the vegetable and fruit vehicles to be operated by the local bodies here on Monday.

He said the 12 cryogenic oxygen tanks, as planned by the Tamil Nadu Government, had reached Chennai from China, which would be used to transport safely medical-grade liquid oxygen from the sources to the hospitals. To strengthen this supply chain further, the State Government had placed orders for four cryogenic oxygen tanks, each with 20 tonnes capacity, from Taiwan, which would reach Tamil Nadu within a couple of days.

Moreover, 1,500 oxygen cylinders from Singapore had reached Vishakapattinam harbor following the orders placed by Tamil Nadu. “These cylinders will reach Chennai on Tuesday (May 25) to be used for taking oxygen to the hospitals in cylinders,” he said.

Asserting that the Tirunelveli Medical College Hospital, government hospitals in rural areas and the private hospitals of Tirunelveli district were having medical grade liquid oxygen in sufficient quantity for treating the COVID-19 patients, he said the State Government was continuously getting the gas from Odisha and Maharashtra from where 900 tonnes would reach here.

He said that 121 tonnes of medical-grade oxygen generated by Thoothukudi-based Sterlite Copper had been given to various government medical colleges in the southern districts and also the private firms supplying the life-saving gas bottled in cylinders. The plant would soon reach its capacity of 30 tonnes of medical oxygen.

Concentrators being donated by sponsors were being used in COVID Care Centres.

Mr. Thennarasu said steps had been taken to bring down the COVID-19 death rate for which early intervention was paramount. “The public should cooperate with the government to go in for 100% vaccination which plays a vital role in preventing death and even severity of the infection,” he said.

Collector V. Vishnu said there was no dearth for vaccines as the district had received 20,000 doses on Sunday.