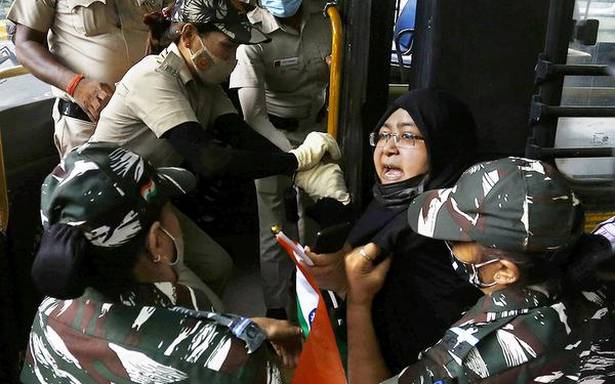 Most of the men picked up by the police have links to Hindu organisations; students, activists protest against hate speech

Deputy Commissioner of Police (New Delhi) Deepak Yadav said the other five accused have been identified as Preet Singh alias Sundar Pal, Deepak Singh, Deepak Kumar, Vinod Sharma, and Vinit Bajpai. It has been learnt that all the accused joined the investigation late Monday night and some of them were picked up from their residence after midnight.

On August 8, a rally was called by Mr. Upadhyay to allegedly demand the end of ‘colonial-era laws’.

It was allegedly attended by members of several right-wing organisations.

Subsequently, several videos of the event went viral, including one showing a group of men — led by a man wearing a saffron-coloured T-shirt — raising anti-Muslim inflammatory slogans.

Delhi Police lodged a case on charges of promoting enmity, flouting COVID-19 guidelines, and not seeking permission for the event.

Profiles of the arrested

Among the arrested is Preet Singh, founder of Save India Foundation. In a live video shared on the organisation’s Facebook page on Monday, Mr. Preet can be heard calling the man — whose objectionable video went viral — a child. “Kisi bacche ne aise naare lagaye hain… hum use samjhaenge [A kid has raised those slogans… we’ll make him understand]”.

Deepak Singh is the president of the Hindu Force — an organisation in which Ragini Tiwari is vice-president.

Ms. Tiwari’s inflammatory and provocative videos about Muslims during the communal riots in Delhi in 2020 had gone viral. One of the latest videos shared by Mr. Deepak shows him speaking against building of mosques and mazars. In the video, he says that the structures “are planned because they will be used as centres during clashes in the future”.

Deepak Kumar, another of the men arrested, is a member of the Hindu Raksha Dal – an organisation founded by Pinki Chaudhary alias Pinky Bhaiya, who claimed responsibility for the attack on Jawaharlal Nehru University campus in January 2020.

Speaking to The Hindu, Mr. Chaudhary’s daughter Karuna said her father was picked up by the police on Monday night.

“Why are the likes of Owaisi [Asaduddin] not arrested?” she asked while questioning Mr. Deepak’s arrest. In one of the recent videos shared by Mr. Preet, Mr. Chaudhary can be heard saying: “Muslims should go to Pakistan”.

Mr. Sharma is a member of Sudarshan Vahini, a self-proclaimed religious outfit.

In support of accused

Protesting the arrest of the six men, over 30 people, including Ms. Ragini, blocked the road outside Connaught Place police station for at least 30 minutes and raised slogans against Delhi Police. “We have been here since early Tuesday and we are not being allowed to meet our brothers who have been arrested,” she said.

As traffic grew and the outer circle started to get affected causing inconvenience to commuters, Station House Officer of the police station approached a male protester, held him by the back of his neck and dragged him to a waiting bus. Ms. Ragini and another protester laid down on the road. They were held by women officers and taken to the bus. They were all removed from the spot.

Piyush Singh, a supporter of those who have been arrested, said: “These are the people who had helped police officers during the Delhi riots when they were being beaten up by rioters. They say these people didn’t have permission, have the farmers taken any permission? Shaheen Bagh was blocked for six months, where were the police? Why no action is taken for videos where Hindus are being maligned?”

Meanwhile, student activists and civil society members gathered near Jantar Mantar on Tuesday to protest against the alleged inflammatory sloganeering.

They carried placards saying “zero tolerance against hate mongers”. Around 100 of the protesters were detained by the police when they tried to proceed towards Jantar Mantar.

Prashant Tondon, one of the protesters, said: “That speech was very dangerous and not in tune with the Constitution or Indian tradition.