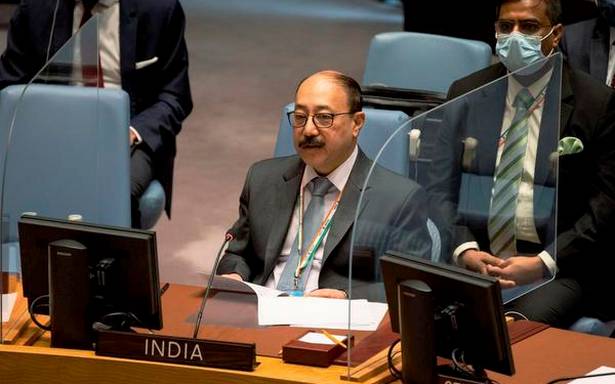 Foreign Secretary Harsh Vardhan Shringla is scheduled to visit Colombo next week, official sources in New Delhi told The Hindu, as India and Sri Lanka seek to engage at high levels amid a perceived strain in ties.

Also Read: Goal of nuclear disarmament can be achieved through step-by-step process: Shringla

The scheduled visit comes 10 days after External Affairs Minister S. Jaishankar and his Sri Lankan counterpart G.L. Peiris met on the sidelines of the UNGA session in New York.

While official sources in New Delhi and Colombo indicated that Mr. Shringla will likely inaugurate some key bilateral projects between October 2 and 5, the thrust of his visit is yet to be known.

The high-level visit follows Mr. Jaishankar’s in January, when he told the leadership in Colombo that it was in “Sri Lanka’s own interest” that the expectations of the Tamil people — for equality, justice, peace and dignity within a united Sri Lanka — are fulfilled. However, Tamil and Muslim minorities point to continuing harassment by authorities, especially around memorialisation and threats to land owned by civilians, in addition to the Tamil leadership consistently highlighting the long-pending political solution.

On the recent bilateral meeting in New York, the Sri Lankan Foreign Ministry said in a statement Mr. Peiris briefed Mr. Jaishankar about “the pragmatic and tangible action” taken by the government to resolve “residual matters after the end of the conflict in May 2009”, referring apparently to contentious issues around truth, accountability and justice that the island nation’s civil war-affected Tamils have been demanding for over a decade.

According to the Sri Lankan Foreign Ministry’s statement, Mr. Jaishankar indicated the need for a “fair and just resolution of residual issues in the aftermath of the ethnic issues is in the interest of both countries”. “The Indian Foreign Minister indicated that our relations should not be limited to a single issue,” the statement said, adding that Mr. Jaishankar emphasised the need for “for a practical conclusion of the number of projects pending implementation, indicating that it would give more confidence to New Delhi to move forward in enhancing relations”.

New Delhi’s concerns over the “slow pace” of India-backed projects in the island nation and the emergence of China as a crucial and influential player in its economy and infrastructure are well known.

The visit is Mr. Shringla’s first to Sri Lanka as Foreign Secretary. He has worked closely on issues pertaining to Indo-Lanka relations in his capacity as Joint Secretary in New Delhi some years ago, overseeing Bangladesh, Sri Lanka, Myanmar and the Maldives.