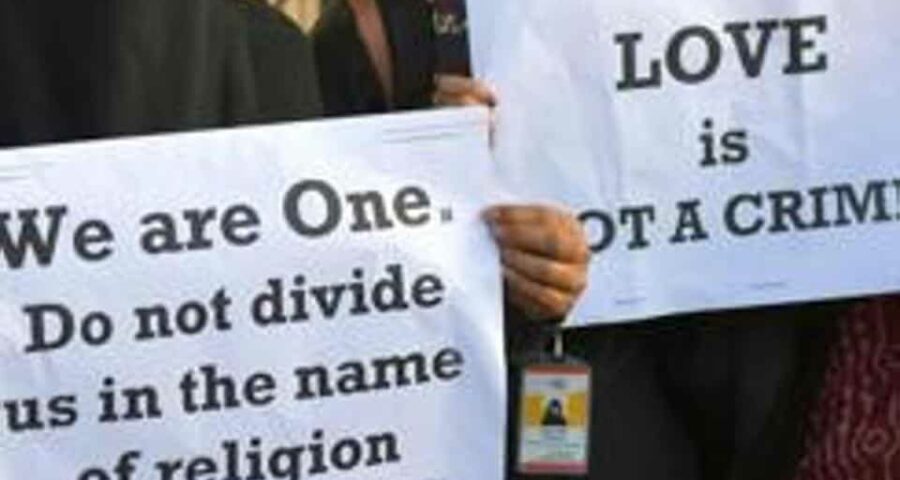 Community interest trumps an individual’s right to choose a life partner and the foremost duty of a secular state is to protect citizens from unlawful conversions, the Uttar Pradesh government told the Allahabad high court on Thursday, defending a contentious new anti-conversion law that critics allege violates constitutional rights.

In an affidavit responding to a clutch of public interest litigations (PILs) challenging the UP Prohibition of Unlawful Conversion of Religion Ordinance 2020, the state government said community and social interest are on a much higher pedestal than the right of two people to enter into wedlock.

The affidavit was submitted before a bench led by chief justice Govind Mathur.

The UP ordinance was enacted on November 24 and prescribes a jail term up to 10 years and fine up to ₹25,000 for conversion under marriage, fraud, coercion or enticement. The law came into force days after chief minister Yogi Adityanath promised to fight against “love jihad”, a term used by some Hindu groups to describe relationships between Muslim men and Hindu women.

Several activists and legal experts have argued that the law could be used to target Muslims and infringed on the fundamental rights to equality, freedom of religion, and life and personal liberty.

But the 35-page affidavit contended that the law sought to protect the dignity and interest of a woman while she exercised her right of persona liberty and chose a life partner. It also said that the people were feeling safe after the legislation came into force. “Once two adults agree to enter into a wedlock but if there is a fear psychosis in the community, then it is about the community interest rather than community thinking.This community interest is on a much higher pedestal than agreement of two individuals to enter into a wedlock,” the document read. “Community interest is synonymous to social interest which is equivalent to public interest.”

The bench proceeded to turn down the state government’s request, observing pendency of the matter before the apex court cannot be the sole reason for the high court to keep its hands off the case. The bench fixed the matter for a hearing on January 15.

The state government also pointed out that the words “love jihad” were nowhere used in the ordinance and claimed the law was equally applicable to all forms of forced conversion, not just to interfaith marriages.

“Thinking of family or community is not the foundation but the interest of the community and interest to keep the family safe, and as a consequence, the entire social fabric in a balanced position is the objective, for which the consent of two adult individuals has to be regulated. In this regard, there being no existing law in the state of UP, the present legislation seeks to cure the mischief…In fact, people have reposed faith and are feeling safe after coming into force of the present legislation,” stated the affidavit.

The document also detailed four instances to illustrate what constituted forced conversion in the government’s view.

A Hindu, Sikh or Muslim boy studying in a convent school, and a Christian family living as a tenant alongside non-Christian families constituted situations that didn’t amount to a forced conversion.But if Scheduled Caste person converts after being “lured” by a group of missionaries, or a Hindu woman marries a Muslim man, that could be an example of forced conversion, according to the government. In the latter case, the document said that after marriage, the woman will find herself under pressure to give up her faith even if she didn’t wish to; and stop worshipping idols and accept Islam so that she could have a valid marriage under the personal law and enjoy the right of inheritance in her husband’s properties.

“This will amount to forceful conversion.The position remains the same if a Hindu boy wants to marry a Muslim girl. The Hindu boy will have to accept Islam.Here again, there is exercise of freedom of choice but loss of dignity, and the conversion is not exercised as a choice but on account of compulsion due to personal law intervening,” maintained the affidavit.

According to the government, the ordinance intended to address this “conflict of interest” by safeguarding the inter-fundamental rights of individuals. The law did not aim at putting any fetters on the right of a woman to marry as per her choice but subjected it to “certain machinery provision which are regulatory in character”, it added.

Justifying the urgency behind the ordinance instead of passing a bill in the state assembly, the government maintained that a rise in cases of forced conversions led to some heinous crimes and a public outcry. It also pointed out that similar statutes existed in eight other states, and countries such as Nepal, Bhutan, Sri Lanka and Pakistan.

The government further urged the high court to leave it to the executive to decide the questions relating to validity of a marriage, as provided under the ordinance, and not decide such issues in judicial proceedings. It cited a judgment by the United States Supreme Court to buttress this argument.

On the question of the law placing the onus on the accused to prove his innocence as against the common principle of presumption of “innocence till proven guilty”, the affidavit said the burden of proof had rightly been placed on the accused since they will only have special knowledge of facts in these cases and that reverse onus is justified in cases of “social evil”.

The state government also criticised the November 11 judgment by another bench of the high court, which held that the right to choose a partner, irrespective of religion, was intrinsic to “ the right to life and personal liberty”. That judgment was passed in a case related to an interfaith marriage between a Hindu woman and a Muslim man.The affidavit submitted that the HC judgment was “not a good law”.

SC refuses to entertain PIL for free, fair assembly polls in West Bengal
We and our partners use cookies on this site to improve our service, perform analytics, personalize advertising, measure advertising performance, and remember website preferences.Ok