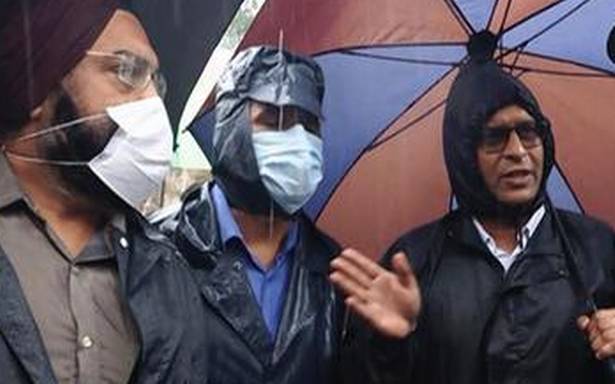 Flood monitoring officers inspected 161 locations in the city after the recent rain and recommended solutions to the problem of flooding, said Municipal Administration Minister K. N. Nehru on Wednesday.

Speaking to media persons on the sidelines of the meeting with flood monitoring officers, Mr. Nehru said heavy duty pumps and heavy machinery would be used to drain water in flooded areas.

“In the long term, we will take initiatives to find a permanent solution to the problem of flooding. Currently, we are planning to focus on installation of pumps to bale out water,” Mr. Nehru said.

Of the 2,700 km of drains and canals, a total of 721 km of the network has been desilted ahead of the onset of the monsoon, he said.

Officials at the meeting pointed to the inadequate number of culverts in railway land to drain water in areas such as Rangarajapuram, Mambalam, T. Nagar, Nungambakkam, Egmore and Saidapet.

Meanwhile, a section of residents of Anna Nagar West Extension said senior IAS officials who are part of the flood monitoring team visited Padi Kuppam Road and assured residents that a temporary drain would be constructed across a private land of a new residential apartment complex that had raised the level by three feet. The machinery is expected to reach the flood affected locality on Wednesday night. Velachery AGS Colony Residents Welfare Association president Geetha Ganesh said the water receded only after the Greater Chennai Corporation installed heavy duty pumps.

Chennai Corporation Commissioner Gagandeep Singh Bedi said water has receded in many of the flood-affected areas after additional machinery was hired.

Pointing to the surprise inspection of T. Nagar by Chief Minister M. K. Stalin on Wednesday, Mr. Bedi said the water has receded in most of the roads in T. Nagar by Wednesday. Officials inspected the three railway culverts in T. Nagar to assess the situation ahead of the next spell. “On Wednesday, the number of flooded areas had reduced to 27. A total of 492 bigger pumps have been installed to drain water,” Mr. Bedi said.

Health Minister Ma. Subramanian said 2,000 additional labourers would be employed to drain water in flooded areas, based on the orders of the Chief Minister. “Medicines worth ₹120 crore have been kept ready to help flood-affected residents,” said Mr. Subramanian.

HR and CE Minister P. K. Sekar Babu said arrangements would be made to receive all complaints from residents to resolve civic issues caused by flooding in North Chennai.