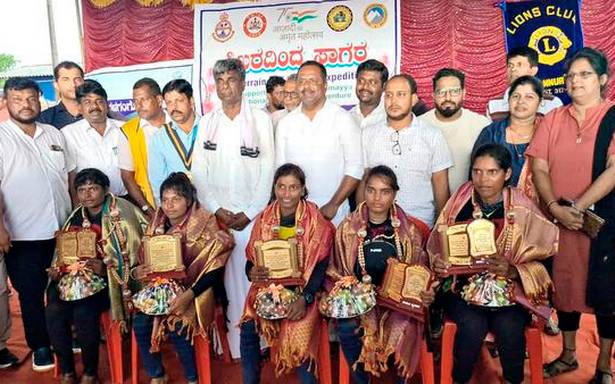 Having climbed the 5,245 m high Kolhoi range in Himalayas and cycled 3,350 km to reach Karwar, five women from the State also kayaked 300 km of the Karnataka coastline to reach the Ullal coast in Mangaluru on Monday evening. With this, these members from different SC/ST hostels of the State successfully completed their 75-day long ‘Shikaradinda Sagara’ (from mountain ranges to sea) expedition.

“This expedition has given us varied experiences. From battling mountaineering sickness, to cycling in varied climatic conditions and overcoming sea sickness, we did it all. We really felt how overcoming difficulties brings joy,” said a beaming Puspha, from Madikeri.

Pushpa, Asha from Bengaluru, Bindu from Mysuru, and Aishwarya and Dhanalakshmi, both from Shivamogga, were part of the all terrain expedition jointly conducted by the Indian Mountaineering Association and Department of Youth Services and Sports’ General Thimmayya National Academy of Adventure. The Youth Services and Sports Minister K.C. Narayana Gowda flagged off the expedition on August 16.

After acclimatizing with the cold weather, the team scaled Mount Kolhoi, which is 21 away from Pahalgam of Jammu and Kashmir. “It was really hard to climb through glaciers and hard rocks. But once we reached the top (of the hill), our joy knew no bounds,” said Ms. Bindu. The team practised cycling in Himalayan ranges and then set forth to cover the 3,300-km long route till Karwar. Their endurance was challenged while going up and down the hill ranges. They battled heat while riding through Punjab and heavy rains during their ride along the Maharashtra coast.

From Karwar, the team kayaked in the rough sea using the white water rafts. As a precaution, the team members sported gowns that prevented them from drowning. The members in separate kayaks, and the support staff of the academy in a separate boat, reached Ullal around 5 p.m.

Lauding the feat of members, Minister for Social Welfare Kota Srinivas Poojary, who received the members at Ullal beach, said these women belonging to backward communities have successfully completed a challenging expedition. “I will shortly call them for a felicitation by Chief Minister Basavaraj Bommai,” he said.