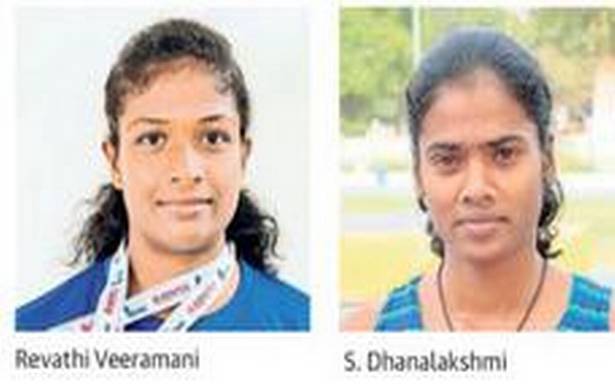 The Chief Minister announces cash incentive to the athletes; 7 sportspersons have already qualified

Five more sportspersons from Tamil Nadu have qualified for the Tokyo Olympics, in addition to the seven who have already qualified.

Chief Minister M.K. Stalin on Tuesday announced an incentive of ₹5 lakh to each of the five athletes.

Revathi Veeramani, Subha Venkatesan and S. Dhanalakshmi (4 x 400 m mixed relay) and Arokia Rajiv and Naganathan Pandi (4 x 400 m relay) are part of the 26-member Indian athletics team announced on Monday. Ms. Revathi is working as commercial clerk-cum-ticket collector in the Madurai Division of Southern Railway. General Manager of Southern Railway John Thomas said, “I share my pride in and admiration for Ms. Revathi’s achievement of figuring in the Indian contingent. I extend my heartfelt wishes to her for bringing laurels to the nation.”

The government earlier handed over a cash incentive of ₹5 lakh each to the seven who qualified for the Olympics. They are sailors Nethra Kumanan, Varun A. Thakkar and K.C. Ganapathy, paddlers G. Sathiyan and A. Sharath Kamal, fencer C.A. Bhavani Devi and Paralympic high-jumper T. Mariyappan.

Acknowledging the steps taken by the State to promote sports among the youth, Ms. Latha flagged the issue of entry fees for athletes to use the sports facilities. “In addition to the fees, the GST is collected. The government could look into this issue, which is affecting several athletes,” she said.