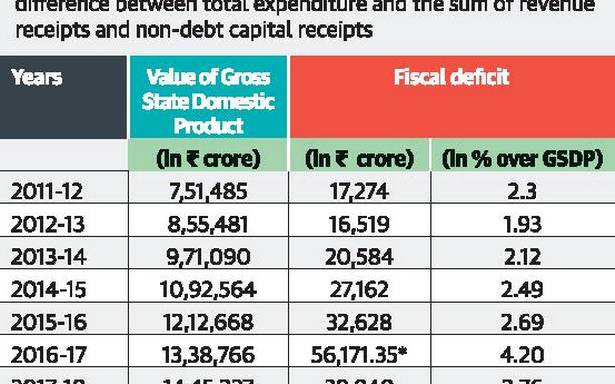 Tamil Nadu’s fiscal deficit during 2020-21, which marked an all-time high in terms of absolute figures, was, however, well within the level permitted by the Centre for the year.

The State’s fiscal deficit was 4.36% of the Gross State Domestic Product (GSDP), against the permitted level of 4.5% for the previous year, according to workings of the Finance Department.

Fiscal deficit pertains to the difference between total expenditure and the sum of revenue receipts and non-debt capital receipts.

Considering the adverse impact of COVID-19 on the economy, the Central government had permitted the States to increase their borrowings by 2% of the GSDP, subject to certain conditions.

In other words, fiscal deficit could go up to 5% of the GSDP, against the normal 3%.

In the case of Tamil Nadu, it was 4.5%, as the Centre took cognisance of the State’s implementation of two of the four conditions — ease of doing business and the One Nation One Ration Card scheme — though the latter had contended that it had also taken up reforms in the finances of urban local bodies.

As regards the fiscal deficit figure, the State government differs from the Comptroller and Auditor-General (C&AG), which has come out with a higher figure, ₹92,305.07 crore.

The difference is on account of the State government excluding ₹7,608.38 crore from the overall figure of fiscal deficit.

This amount, despite being regarded as loan, is not liable to be repaid by the State as it is in lieu of compensation for the Goods and Services Tax (GST) losses, and is to be serviced out of the Centre’s GST compensation cess.

A year ago, the government decided to raise the age of superannuation of employees and freeze the hike in dearness allowance. The measures had contributed to a significant degree of expenditure control, because even as per the C&AG’s calculations, expenditure on salaries and wages for the year was about 86% of the budgeted figure.