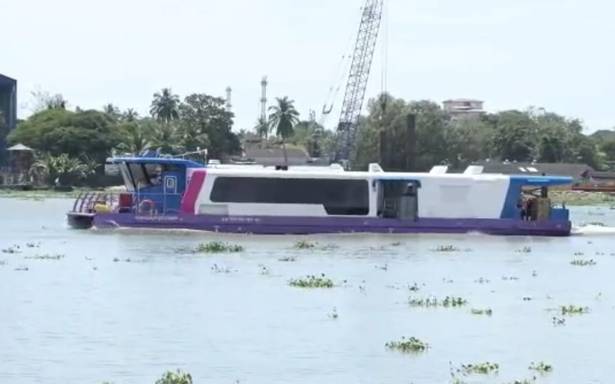 The 50-seater ferry was christened Muziris — named after what was once a thriving BC-era port — and is said to have been located at Pattanam village located 25 kms from Kochi city.

CMD of CSL Madhu S.Nair, MD of KMRL Loknath Behera and Madhumita Behera, wife of Loknath Behera, on board the first Water Metro ferry that was handed over by CSL to KMRL on Friday. Photo: Special Arrangement

Four other Water Metro ferries are expected to be launched in the coming months. They will join the first vessel in conducting trial runs, mainly in the Vyttila-Kakkanad corridor, following which their commercial operation is expected latest from April. Each ferry is priced over ₹7.30 cr.

The 23 ferries would be complimented by another 55 smaller ferries — each having seating capacity of 25 — in the coming years, as part of the Water Metro project.

This would be the first time in the world that a centrally-controlled integrated water transport system comprising a large fleet, would be battery-powered. The ferries use lithium titanate oxide (LTO) batteries — which are considered the latest and safest in battery technology, and are capable of fast charging. They can be charged in 10 to 15 minutes’ time, while passengers are alighting/boarding. The ferries would have generator back up, which will take over their operation automatically, in the event of any failure of the battery system, the KMRL said.

Floating jetties will be made available at the 38 ferry terminals, making the ferries disabled and elderly friendly. The energy-efficient hull is designed for 10-knots speed (18 kmph), which is considerably faster than conventional ferries in operation in Kerala.

The interior of the Water Metro ferry that was handed over by CSL to KMRL on Friday. Photo: Special Arrangement

The ferries having wide windows that provide an exotic view of the backwaters and the banks, for passengers and tourists who traverse 76 route kms. The interiors are designed much like in Kochi Metro, in the same colour scheme. The ferries are designed to create very less waves over the narrow channels even at high speed and would provide commuters a silent mode of transport. An automatic boat location system will continuously monitor their position from the Operating Control Centre (OCC) at Vytilla Mobility Hub.

The Kochi Water Metro would thus be a climate-friendly integrated water transport initiative to improve waterway connectivity, with a total of 78 ferries linking 38 terminals located over 76 route kilometers. The ferry jetties are in different stages of completion.