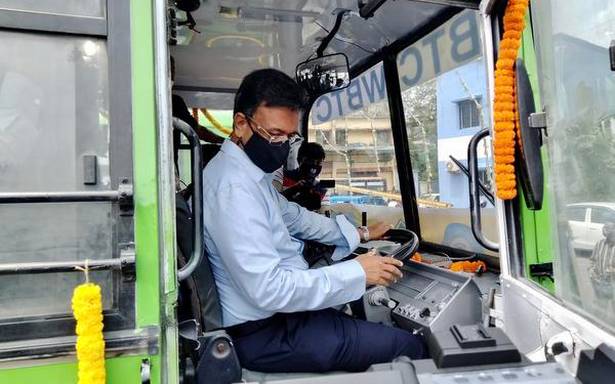 They will bring down cost of running and also reduce pollution, says Minister.

The first CNG bus hit the roads of Kolkata on Monday — more than two decades after such buses began running in Delhi. Transport Minister Firhad Hakim inaugurated the service himself driving a CNG bus for the cameras.

“Kolkata now has CNG. In future, buses will be mostly electric and CNG. This will bring down cost of running buses and also reduce pollution,” Mr. Hakim said after the launch.

At the moment, two CNG buses will be run on a trial basis and if found operationally feasible, the conversion will be expanded. The two buses have been converted from diesel and will be run by the West Bengal Transport Corporation, which has nearly 1,000 buses in its fleet, including 80 electric.

On June 21, the WBTC and the Bengal Gas Company Limited had signed a CNG bus fuel agreement at the Kasba Transport office, with the Minister laying the foundation for the first CNG station in Kolkata for government buses. Mr. Hakim had said at the time the CNG station would become operational in six months.

Kolkata has the most modes of transport, with motorised boats (many of them belonging to the WBTC) and trams (owned by it) also catering to its people. While ferry ghats manage to get a fair share of daily commuters, tram depots are fast becoming extinct: during the peak of their popularity as a mode of transport, in the 1960s, there were 52 tram routes in Kolkata, but since 2019, only six routes have been functional.