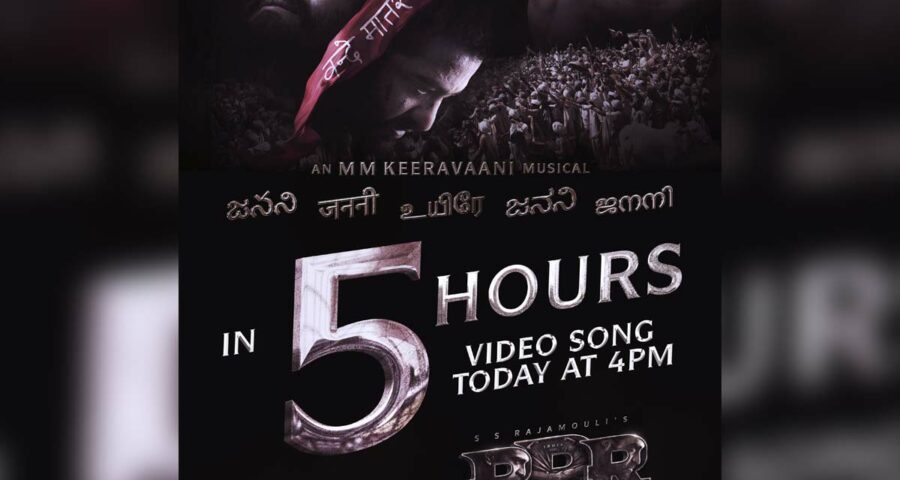 SS Rajamouli’ magnum opus RRR who took the internet by storm with ‘Naatu Naatu‘, are all set for the emotional patriotic song soul anthem, which  is titled ‘Janani’ in Telugu. The makers are claiming  that they have contemplated the song to bring sentimentality and patriotism into the grid.

The emotional visuals captured by KK Senthil Kumar are said to be the highlighted of this song. Today morning the team of RRR once again confirmed that song Janani/Uyire will be out today at 4 pm by sharing a poster that features the  captivating still of Ram Charan and NTR from the movie with Ajay Devgn’s powerful eyes.

RRR makers will release the song in all the languages the movie is being made in. Starring Ram Charan, Jr NTR, Alia Bhatt, Ajay Devgn, Shriya Saran, Olivia Morris, Alsion Doody, Rahul Ramakrishna, Samuthirakani, Ray Stevenson and Rajeev Kanakala in pivotal roles, RRR is all set to hit the screens on 7th January.

RRR is a fictitious story set in the 1920s and based on two legendary freedom fighters Komaram Bheem and Alluri Sitarama Raju.  Bankrolled by DVV Danayya, RRR is made on a massive budget of Rs 350 crore and will release in multiple languages including Hindi, Tamil, Telugu, Malayalam and others.