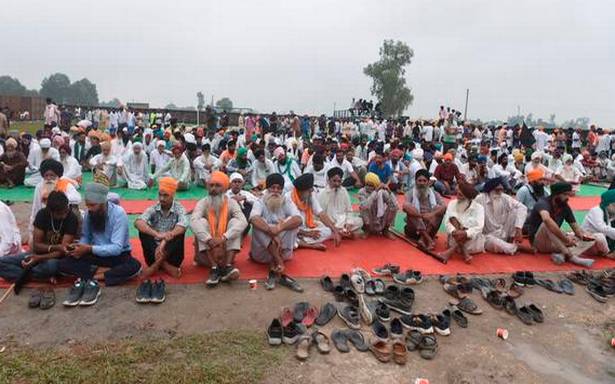 A day after four farmers were mowed to death in a violent incident involving the convoy of a BJP Minister at the Centre, hundreds of farmers predominantly from the Sikh community landed at the site of the incident in Tikonia.

For several hours, the farmers parked a tractor next to the ground where the incident took place, and kept on display in glass enclosures the bodies of the four dead farmers. Farmers said they would not budge from the site and would not carry out the last rites till their demands of action against Union Minister of State for Home Affairs Ajay Kumar Mishra and his son Ashish were met. Religious slogans and chants resonated at the site.

However, around 1 p.m., the tension was defused after BKU spokesperson Rakesh Tikait emerged after a meeting with top Uttar Pradesh government officials and from a makeshift platform requested the protestors to ask the families of the victims gathered at the site to go home.

Mr. Tikait, who started his speech with the slogan, “Veer shahidon ka balidan, yaad karega hindustan (the country will remember the sacrifice of the brave martyrs),” told the crowd that the Kisan sanghathan had won a “big victory” as the Asish Mishra Union Minister’s son had been booked for murder, ₹45 lakh compensation was promised for each family along with a government job, and that a judicial probe of the incident would be conducted.

“The Minister and his son will not be spared.. he will lose his ministerial post,” Mr. Tikait assured the protestors.

The Bhartiya Kisan Union (BKU) leader also said that an ultimatum had been issued to the government that if it did not take satisfactory action till the funeral rituals of the dead were completed in 10-12 days, a mahapanchayat would be called.

Following his assurances, the district administration officials arrived at the site and moved the bodies into ambulances to take them to the district hospital for autopsy and the farmers and their leaders slowly started to disperse.

An FIR under IPC 302 and 304a has been lodged against the Minister’s son, who the farmers alleged was in one of the vehicles that ploughed into the waiting farmers,and 10-15 unknown persons.

Among the dead, wrapped in a BKU flag, was the body of Lovepreet Singh, 20, a resident of Chauktha Farm in Lakhimpur Kheri. His mother Sukhvinder Kaur was inconsolable, weeping and kissing the glass enclosure inside which the body lay.

Lovepreet, a farmer like most other Sikhs in the fertile Terai belt of U.P., was the only son of the family. His brother-in-law Makkan Singh questioned the narrative of the Union Minister Mishra that the vehicle involved in the incident was enroute to receive Deputy CM Keshav Prasad Maurya at the helipad of the Maharaja Agrasen ground .

Makkan Singh said the administration had informed the protestors that the Deputy CM’s route had been changed but even then three cars belonging to Mr Mishra’s convoy drove towards the farmers who were lined up on either side of the road with black flags with full speed. “It was planned murder,” said Mr. Singh.

Next to Lovepreet’s body lay that of Nachattar Singh, 60. When the news of hid death reached him, his younger son, Mandeep, 25, an SSB jawan left his post in Almora at 9 p.m. to reach Tikonia. The family hails from Dhauraha in Kheri. The other victims were from Bahraich district.

With the rest of his family, Mandeep sat in silent grief, as his mother was being consoled by relatives. Mandeep too blamed the administration and repeated the allegation made by the local people that the police had saved the Ashish, the BJP MP’s son.

“What was the police doing there? Why could they not secure the area,” he asked.

Anger against Mr Mishra has been simmering ever since his speech on September 25 when asked the protesting farmers to “mend themselves” or else he would not take “more than two minutes”in clashe to do it himself if they faced him. He had also reminded the people of his record before he was elected a public representative.

The Sikh community, which has been at the forefront of the farm protest in the Terai, where they own and farm large tracts of land in Kheri and Pilibhit and adjoining districts, perceived it as threat.

Vijay Dhull, SP Kheri, said the bodies of the four persons who died in the clashes after the vehicles ran over the farmers had been sent for postmortem and now those of the farmers would follow. The officer, however, said he was not sure how the other four persons were killed, amid allegations that some were lynched by the angry farmers after the cars ran amok.

"Some say they were beaten up, some say the cars they were in overturned. Only a post mortem examination will tell," he said.

Asked if they were lynched, Mr. Dhull said there were multiple versions and it was not yet clear

At the site, two vehicles belonging to the convoy of the minister were set on fire and on Monday they were sites of intrigue for all visitors.

Eyewitnesses in Tikonia said that the three vehicles raced towards them and mowed down the farmers without a warning. The farmers said they had earlier shown black flags to a block pramukh and the Minister’s brother-in-law. They also claimed that they had allowed several other cars to pass through before the incident.

Sher Singh, a farmer, alleged that Ashish Mishra had tried to flee after the vehicle he was in overturned. Sher Singh also alleged that the Minister’s son shot dead one of the farmers who tried to catch him as he tried to escape the crowd. After this he fired several shots in the air to keep the farmers away before police rescued him, alleged Sher Singh.

Not at site: Ashish

Ashish Mishra, the minister’s son, has however denied the allegations and told a news agency that he had been at the ancestral event at his village Banveerpur from 9 a.m. till the end of the programme.

"I was not at the incident site," he said.

Farmers, however, claim they saw him in a vehicle brandishing a pistol. “He had come to the site deliberately to show his might, and scare the farmer.” said Harpal Singh another farmer.

Gurjant Singh, another local, alleged that the police helped Ashish Mishra escape from the site.

Among the eight who died was Raman Kashyap, a local scribe who was covering the protests. How he died is still unresolved, especially for his family.

His father Ram Dulare, while returning after his cremation, said he suspects his son died after being crushed by the cars.

“The farmers did not run the car over anyone. Whoever drove it must be from BJP or someone close to the MP’s son,” he said.

Mr. Dulare submitted a police complaint, naming both sides but said he was sure that it was a car that took his son’s life and that he was not lynched. “Gadi se hi mera beta mara hain. Ab chahe kiski gadi ho (he was killed by a vehicle no matter whose car it was),” he said, describing the wounds on his son’s body, which included a head injury. Mr Dulare wants a government job for his daughter-in-law and ₹ 50 lakh compensation.