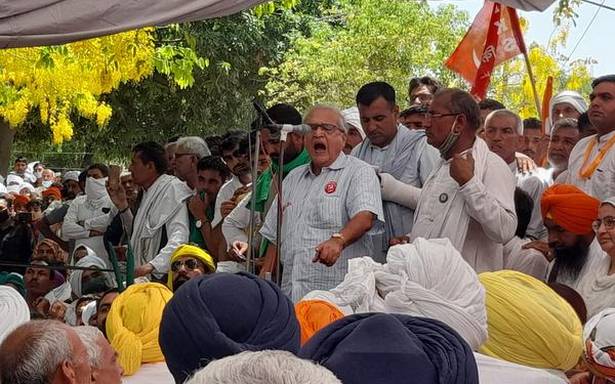 Police effort to prevent them from entering the city proves futile.

Defying the lockdown, a large number of farmers from across Haryana gathered in Hisar on Monday in protest against the police action on agitating farmers during Chief Minister Manohar Lal’s visit a week ago.

Farmers, including women, started assembling at Krantiman Park in Hisar around noon travelling in tractors, multi-utility vehicles and mini-trucks despite attempts by the police to prevent them from entering the city.

Condemning the police action against the farmers, Mr. Rajewal said those in power had forgotten that they were the representatives of the people and the attack on the farmers in Hisar was an attack on the entire farming community. He said the farmers were also fighting to protect the Constitution which said that the government in a democracy was for the people, by the people and of the people. He said people had made a mistake by electing the present government and had failed to understand its true intentions. He also made an appeal to the farmers to maintain peace and calm to make this movement a success.

Mr. Charuni said the farmers had gathered seeking withdrawal of the cases registered against them and demanding action against the police officers for pelting stones at the farmers. He said the administration should also book the Chief Minister for violating the Covid protocol during inauguration of the hospital on May 16.

Comrade Suresh Kumar, Haryana vice-president, Centre of Indian Trade Unions, said the administration had invited a delegation of the farmers to discuss their demands and the meeting was underway.