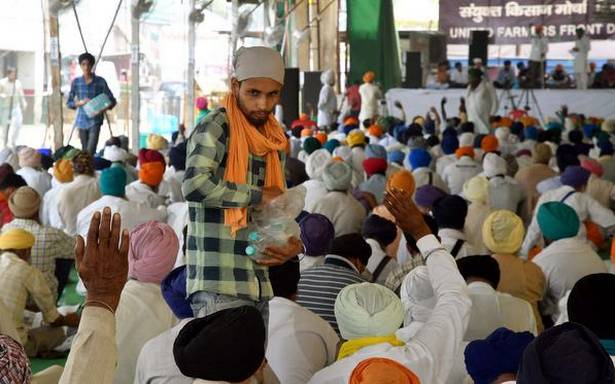 Farmer leaders say they will give govt. time till May 9 to agree to their demands

Protesting farm unions under the banner of the Samyukt Kisan Morcha plan to block the Western Peripheral Expressway surrounding Delhi from 8 am on Saturday to 8 am on Sunday.

They will be joined by a contingent of youth from Punjab led by gangster-turned-activist Lakha Sidhana, who is wanted by Delhi Police in connection with the violence in the capital on Republic Day.

The 24-hour blockade of the road, also known as the Kundli-Manesar-Palwal or KMP Expressway, is intended to be “a warning to the government”, said the SKM in an official statement.

At their meeting on Thursday, SKM leaders also decided that they would “give the government time till May 9” to accede to their demands, before going forward with their proposed march to Parliament, according to a leader present at the meeting. “Anyway, nothing will happen till [election results are declared on] May 2. Plus, many farmers will be busy with wheat harvesting till May 10. So we will take action after that,” he said.

About 25,000 vehicles are expected to be affected by the blockade, which was advanced by three hours from the originally planned starting time of 11 am on Saturday. Farmers plan to hold dharnas at the entry points to the expressway, as well as at the toll plazas on the route. They advised commuters to avoid the road, but said those stranded on the Expressway would be provided food and water.

Mr. Sidhana, who is also known as Lakhbir Singh, had absconded after the Delhi Police named him as an accused party in the events of January 26 and put a ₹1 lakh reward on his head. However, he has been seen addressing events in his native Bathinda, and in videos posted on social media.

On Friday, he resurfaced, heading to Delhi from Sangrur in Punjab in a convoy of vehicles. In a video posted on the SKM’s official Facebook page, he urged his followers to join him in the blockade of the Expressway. “We have to go peacefully. We have to close down the KMP,” he said.

Speaking from an open vehicle, he told local journalists that the government registered false cases to weaken the agitation. “If the government wants to arrest me, I am not running away. But the main thing is that this agitation has to succeed,” he said.

Despite initially pointing a finger at Mr. Sidhana, along with actor and activist Deep Sidhu, for provoking the chaos and violence that marred their tractor parade on January 26, the farm unions seem to have made their peace with him. On April 1, the Punjab unions and the SKM said they had decided to “move ahead with Lakha Sidhana and the associated youth force to intensify the farmers movement”.

“Let the government take whatever action they want to. If someone is rectifying their mistake, we will not prevent them. Lakha Sidhana is not part of the SKM, but he is part of the agitation,” said an SKM leader who did not wish to be named. “We are only insisting that all those who join us must be committed to a peaceful protest. We will not compromise on violence.”