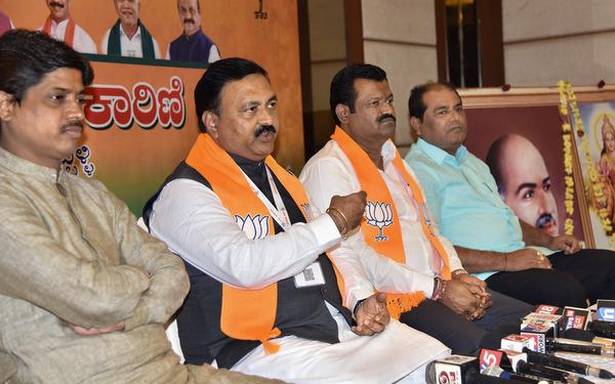 The BJP State executive committee meeting has decided to strengthen the party at the booth-level by focussing on micromanagement involving ‘page pramukh’ and ‘page samithi’ to aim for winning 150 seats in the 2023 Assembly polls.

Briefing presspersons after conclusion of the meeting, party State general secretary Mahesh Tenginakai said during the two- day deliberations, the strategy for next Assembly elections and organisational programmes for the next three months were finalised.

He said the meeting resolved focus on ‘page pramukhs’ and ‘page samithis’. Various programmes for strengthening the organisation was emphasised upon and a clear message on not tolerating indiscipline was sent out, he said.

Issues such as extending ‘Vistarak Yojana’ was also discussed. Preparations to secure 150-plus seats in the Assembly polls will be done meticulously, he said.

He clarified that the issue of defeat in the Belagavi Council poll was not raised during the meeting and that the Jarkiholi brothers had taken prior permission from the State president for not attending the meeting.

The executive also resolved to hold the next meeting of the committee in Vijayanagar district on March 28 and 29, 2022.

Regarding the slow pace of developmental works in the twin cities, Minister Shankar Patil Munenakoppa said he had taken up the issue with officials concerned. Works that were delayed due to COVID-19 will be expedited, he said.