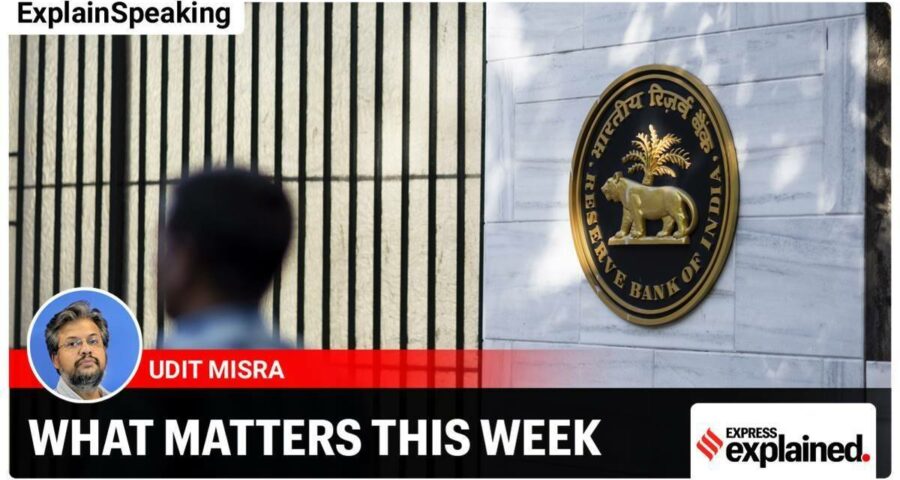 To be sure, RBI has been in an unenviable position. While it is true that it has to control inflation in the domestic economy, the central bank is not entirely in control of all the reasons that lead to a spike in prices. Later on this week, October 8 to be exact, the Reserve Bank of India will review its monetary policy stance. If you have been reading ExplainSpeaking regularly you would recall how, over the past two years, the RBI has been trying everything in its arsenal to boost India’s economic growth while choosing to soft-pedal inflation control. This has been crucial because maintaining retail inflation close to 4% is the legally mandated requirement for RBI; there is no such mandate (indeed, there can’t be) with respect to GDP growth. In the past, ExplainSpeaking has also elaborated how RBI’s prioritising growth could lead to an inflationary spiral, which, once it is put in motion, may be difficult to control.

To be sure, RBI has been in an unenviable position. While it is true that it has to control inflation in the domestic economy, the central bank is not entirely in control of all the reasons that lead to a spike in prices.

Take, for example, the government imposing high taxes on petrol and diesel. High fuel prices tend to have a massive inflationary spike not just directly — that is, when you get a full tank of petrol for an SUV or scooter — but also indirectly — when, say, the firm supplying you fruits and vegetables decide to pass on the increase in its transportation costs.

The RBI cannot ask the government to reduce the taxes on petroleum products just as it cannot dictate how much money should the government borrow in a particular year.

Government borrowing is another key factor. If the RBI prints money to finance the gap between the government expenditure and revenues, it is quite likely that the extra cash in the system will fuel inflation. The RBI is owned by the government and it cannot tell the government that it will not furnish it with the money required to carry out policy decisions.

Further, often enough retail inflation is because of fruits and vegetable prices spiking due to temporary factors over which the RBI has no control — for example, unseasonal rains ruining a crop and resulting in a spike in prices of food articles.

Then there are a whole host of international factors.

Crude oil prices being a critical one. Last week you read that crude oil prices had breached the $80 per barrel mark for the first time in three years. RBI has little control over how international crude oil prices or supply are determined. It cannot ask the Organization of the Petroleum Exporting Countries (OPEC) to raise the production of crude oil in order to bring prices.

Another similar factor is the action of the biggest central banks such as the US Federal Reserve. If the “Fed” raises interest rates in the US, it tends to attract investors towards the US and away from countries such as India. This results in more dollars being demanded relative to the rupee, which, in turn, leads to the rupee losing value (or depreciating) against the dollar and, in the process, making all Indian imports, such as crude oil, costlier.

These limitations underscore how difficult it is for RBI to review its monetary policy every two months. This is more so during a phase when it is difficult to accurately ascertain the true state of the economy. Readers should also remember that changes in policy interest rates tend to take some time — a few weeks, if not months, at least — before they yield results of any kind.

As such, let’s look at five reasons each why the RBI may want to raise interest rates and why it may choose to maintain the status quo.

Since the RBI has been refraining from raising interest rates for the better part of two years despite inflation staying out of its comfort zone — that is, retail inflation trending over 6% — let’s first look at why RBI may choose to, yet again, maintain the status quo.

1. Contrary to the MPC’s apprehensions, the headline retail inflation rate in the past two months has been lower than the levels expected in the August review.

“India CPI inflation continued to slow for the third consecutive month in August, printing at 5.3% year on year…Recall that during the peak of second wave in May, sharp sequential surge in prices had pushed inflation higher to 6.3%,” write Prasanna A, Abhishek Upadhyay and Tadit Kundu — all three belonging to ICICI Securities — in a recent note.

2. What is particularly relieving about the nature of inflation is the tempering in food inflation. A spike in food prices tends to extract the highest political costs. “Deceleration in the latest month [August] was driven by food inflation that has declined to 3.8%, from 4.5% in July and 5.2% in May,” states the ICICI securities note.

3. What’s even more heartening to spot on the inflation front is that analysts expect inflation to moderate further in the coming few months. “…inflation over next three prints may average (approximately) 4% with at least one print likely at sub 4% on [the] back of favourable base effects,” claims the ICICI note.

4. Another key factor that will bring down the pressure on RBI to raise interest rates is the expectation among several analysts that the government’s fiscal deficit — the gap between its expenditure and revenue — will be lower than what was expected at the start of the financial year.

ICICI Securities analysts expect (see the table below) fiscal deficit to be around 6.2% of GDP as against the expectation of 6.8% (of GDP) at the time of the Union Budget presentation. They are not alone. Nomura too expects the fiscal deficit to be lower by a similar amount (see the table below). 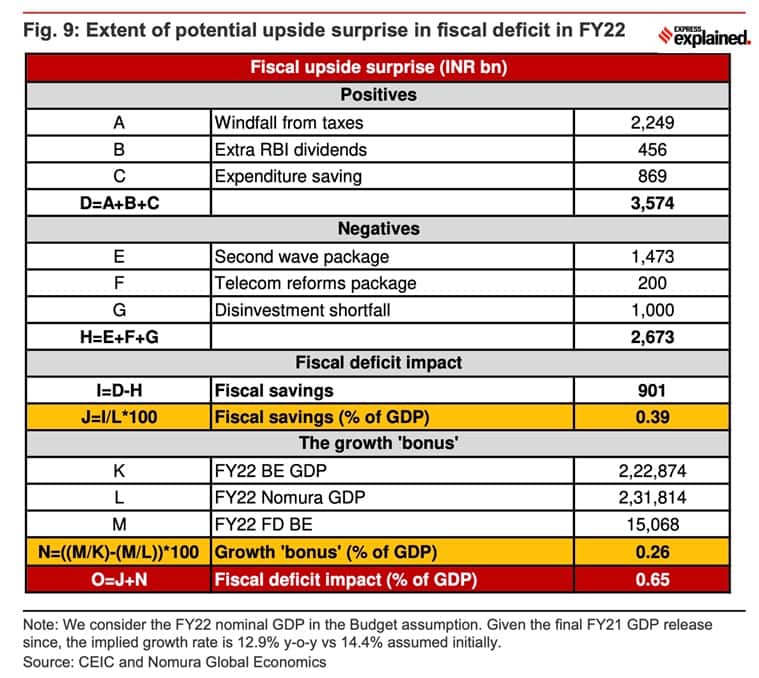 5. Yet another reason why the RBI may choose to avoid raising the interest rate is the apprehension that the economic recovery is still quite iffy. Take a look at the last few prints of Nomura’s India Business Resumption Index (see the chart below). While it is true that the most recent entry (for the week ending September 26) shows a sharp spike, what is quite evident is the plateauing of economic activity (as highlighted by the green marker)in the past few weeks. In its note, Nomura itself states that the “record high” in business resumption index is “likely an aberration” and claims that other real economy indicators continue to struggle. In a nutshell, if inflation has moderated since the last policy review and is likely to stay well within the range for the next couple of months even as the pressure from fiscal slippage reduces while economic growth concerns prevail, it can be argued that the RBI should avoid raising interest rates.

Now, let’s look at five reasons why the RBI’s MPC could, at least on paper, justify raising rates.

1. While headline retail inflation has moderated and so has food inflation, core inflation — that is, inflation rate without taking into account food and fuel prices (both of which are considered to be too volatile) — continues to be high and sticky. See the red line in the chart below (Source: ICICI Securities). 2. Many, including the government, have argued the economy has already posted a V-shaped recovery. Indeed, a case can be made. Just last week, Ministry of Commerce and Industry data showed that India’s Index of Eight Core Industries saw an 11.6 per cent rise in August. Similarly, the seasonally adjusted IHS Markit India Manufacturing Purchasing Managers’ Index (PMI) improved from 52.3 in August to 53.7 in September, indicating a stronger expansion in overall business conditions across the sector. Data from seven cities, provided by Anarock property consultants, shows that housing sales jumped over two-fold in the July-September period and that average prices were up 3%. What’s more, with expanding vaccinations and falling Covid caseloads, the chances of a dreaded third wave (and the associated economic disruption) have been receding sharply.

So, if the economy is already on the mend, why shouldn’t the RBI revert back to its main goal of curbing inflation especially since core inflation is high and sticky?

3. Many analysts expect crude oil prices to breach the $90/barrel mark by the year-end. Some expect the prices may touch $100/barrel by December. This implies that, presuming the government continues to tax petroleum products just as heavily, a litre of petrol could cost almost Rs 125-130 by the time Indians welcome 2022. This will, as explained earlier, further contribute to retail inflation where the core-inflation (non-fuel) component is already quite high.

4. The US Fed has signalled that it would start tightening its monetary stance. Thanks to rising inflation in advanced economies such as the US, bond yields (possibly the best marker for interest rates) have already spiked. The Fed’s decision could force RBI’s hand to move in tandem in order to ensure that India remains attractive for global investors.

5. While analysts at ICICI and Nomura expect fiscal slippage to come down this year, there are others such as Madan Sabnavis of CARE Ratings, who expect the exact opposite. See the table below where Sabnavis, the chief economist of CARE Ratings, expects the fiscal deficit to increase due to revenue shortfalls and expenditure spillage. “Assuming that there is no change in the nominal GDP, the increase in the quantum of fiscal deficit would potentially push up the fiscal deficit to 7.65% to 7.72% of GDP in FY22 resulting in 0.9 to 1.0 percentage point slippage over the budgeted estimate of 6.76%,” he writes in a recent note. Seen from this perspective, boosting economic growth becomes less of a concern than curbing inflation, and, as such, the RBI might appear justified in raising rates.

What will the RBI do?

The smart money is on the RBI maintaining a status quo in October. Readers should remember that in the real world, political economy often trumps economics. During the festive season, which has just started, the government would hope that credit-fuelled consumption — be it a new car or a new house or a new phone — will shore up the economy. RBI raising interest rates at such a critical time is unlikely to be considered prudent by the government.

You may well ask: Then what about inflation, especially since the government faces five key state Assembly elections early in 2022?

The answer lies in the fact that a large part of India’s current inflation is thanks to taxes on fuel prices. To bring that down, the government does not really need the RBI.

Be cautious during the festivities and stay safe