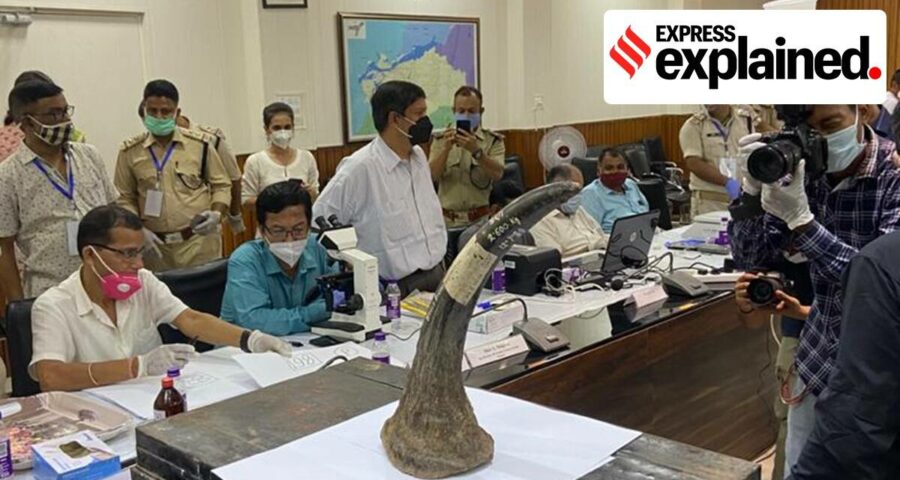 This was announced by the state Cabinet last week after weeks of ‘rhino horn reverification’ exercises by the Forest Department across the state. 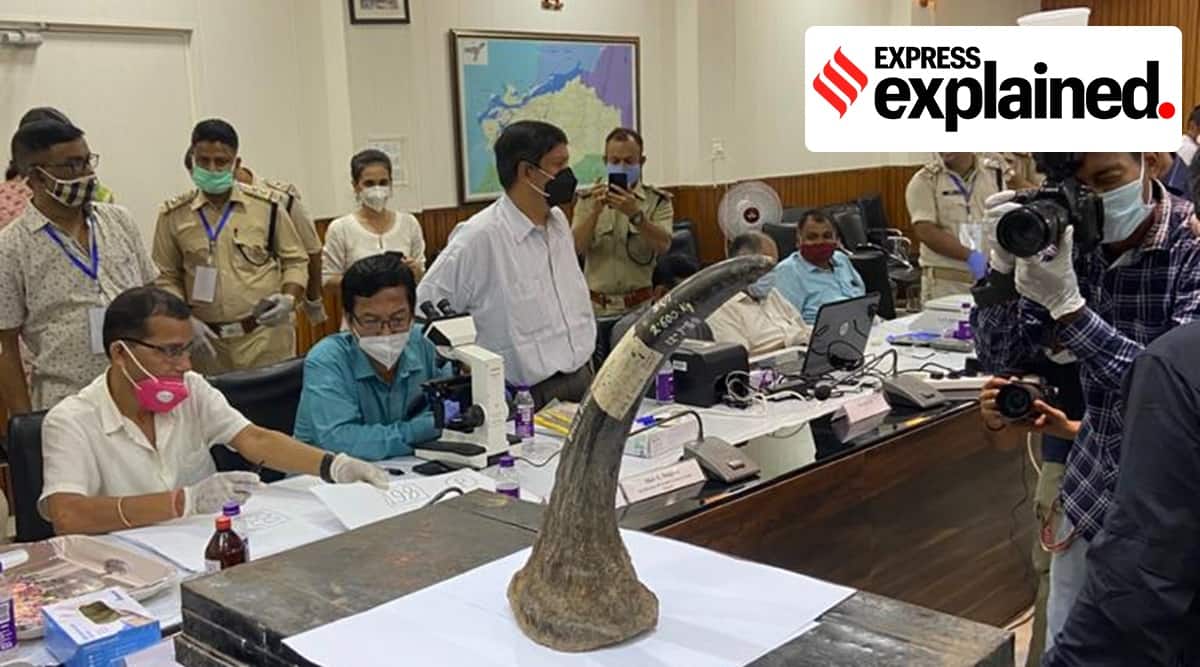 Assam will mark World Rhino Day — September 22 — with a special ceremony by burning a stockpile of nearly 2,500 horns of the one-horned rhinoceros. This was announced by the state Cabinet last week after weeks of ‘rhino horn reverification’ exercises by the Forest Department across the state.

What is the purpose of the ceremony?

The public ceremony — scheduled at Bokakhat in Kaziranga National Park (KNP) with Chief Minister Himanta Biswa Sarma as the chief guest and several other politicians present — has been publicised as a “milestone towards rhino conservation” aimed at “busting myths about rhino horns”. “It’s a loud and clear message to the poachers and smugglers that such items have no value,” said M K Yadava, Chief Wildlife Warden, Assam.

However, in the illegal market such horns can fetch a high price. A Forest Department release said “ground rhino horn is used in traditional Chinese medicine to cure a range of ailments, from cancer to hangovers, and also as an aphrodisiac.” In Vietnam, possessing a rhino horn is considered a status symbol. “Due to demand in these countries, poaching pressure on rhinos is ever persistent against which one cannot let the guard down” it added. 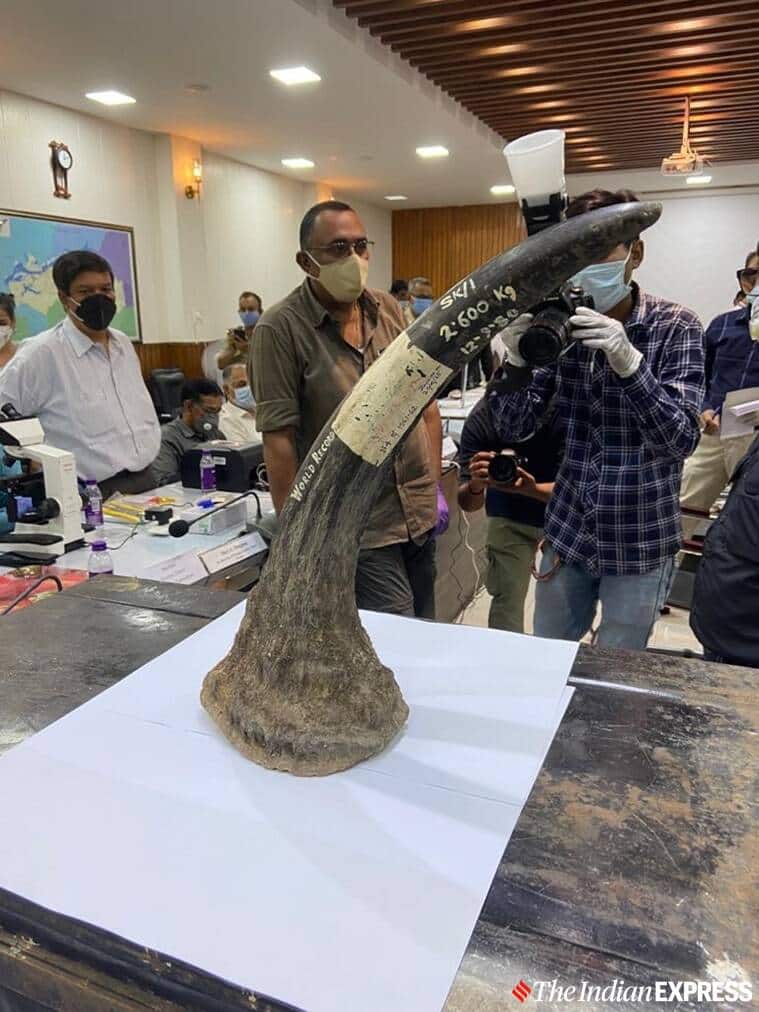 Thus the case for the destruction of horns — a process that is in compliance with Section 39(3)(c) of the Wildlife (Protection) Act of 1972. As per a Gauhati High Court ruling, a public hearing on the destruction was held last month but officials said there were no objections made by the public.

Bibhab Talukdar, chair of the Asian Rhino Specialist Group in the International Union for the Conservation of Nature’s Asian Rhino Specialist Group, and CEO and secretary general of the NGO Aaranyak, said India was a signatory to CITES (Convention on International Trade in Endangered Species of Wild Flora and Fauna). “It is illegal to sell the horns in the country anyway. So instead of the horns decaying in treasuries, the decision to burn it will send a clear-cut message —that this is not medicine,” he said.

Where were these horns all these years?

The horns have been stored in treasuries across the state over decades. After a rhino dies, either out of natural causes or due to poaching, its horn – essentially a mass of compacted hair – is kept in the custody of the Forest Department in the state treasuries.

Through August and September, the Forest Department carried out ‘horn reverification’ exercises spanning treasuries across seven wildlife zones (Morigaon, Manas, Mangaldai, Guwahati, Bokakhat, Nagaon and Tezpur) and examined more than 2,500 horns. It was a multi-step process in which an expert committee — comprising DFOs, wildlife experts, forensic specialists and technicians — examined, tagged, weighed, measured, and extracted DNA for genetic sampling of each and every horn, besides other things. The aim was to recount and reverify the horns — while the majority was put aside to be destroyed, 5 per cent, which had unique characteristics, were earmarked for preservation. 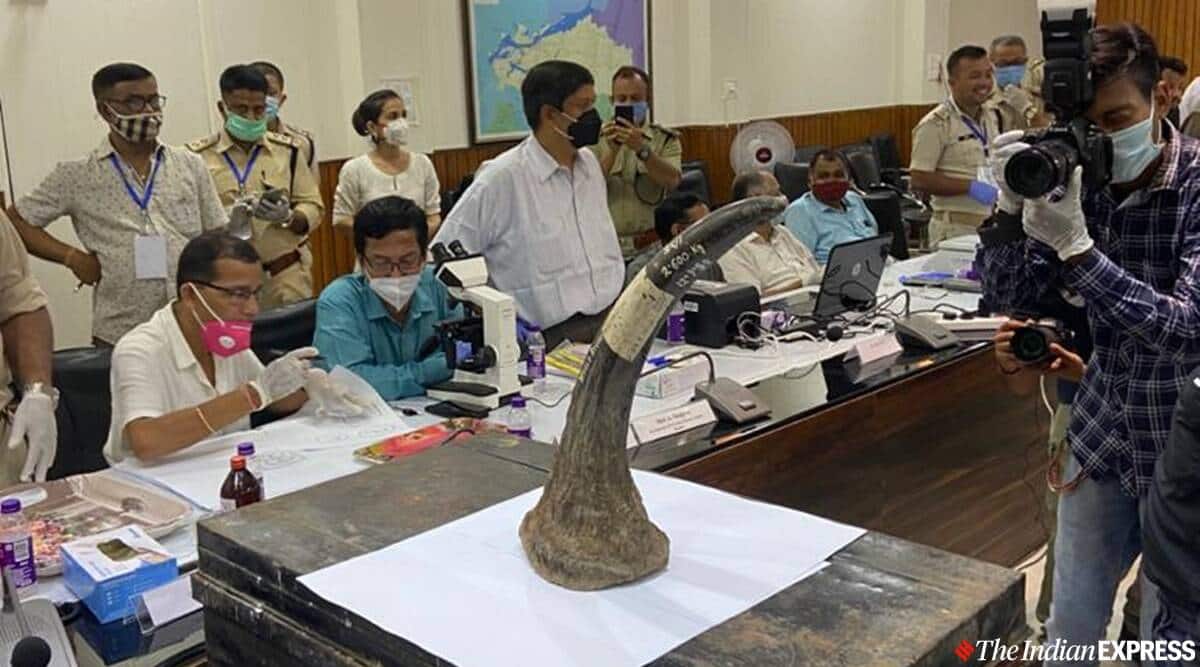 The verification was completed on September 12. After the reconciliation of 2,623 horns, 2,479 were marked for destruction and 94 for preservation. Among the finds were the longest horn (51.5 cm, weight 2.5 kg) from the Guwahati treasury and the heaviest horn (3.05 kg, 36 cm) from Bokakhat treasury. Also, 15 African rhino horns were reconciled and 21 were found fake.

Has such an exercise happened before?

While horns have never been publicly destroyed this way, a reverification exercise did take place in 2016 following allegations by an RTI activist, Dilip Nath, that a section of Forest Department employees had been illegally trading horns in the treasuries and replacing them with fakes.

However, the exercise found that all but five horns were genuine.

How serious a threat is poaching?

“In 2020-21, it has reduced a bit, with two-three rhinos being poached — still, it is a well-organised crime and we must not let our guard down,” said Talukdar.

The one-horned rhino, which was earlier “endangered” as per the IUCN Red List, is now listed as “Vulnerable.”

In 2019, the Assam government constituted a dedicated “Special Rhino Protection Force” to keep a check on rhino poaching and related activities at KNP. A March 2018 rhino census pegged the rhino population at 2,413 in KNP, 101 in Orang National Park, and 102 in Pobitora Wildlife Sanctuary, and a more recent count said there were 43 in the Manas National Park.