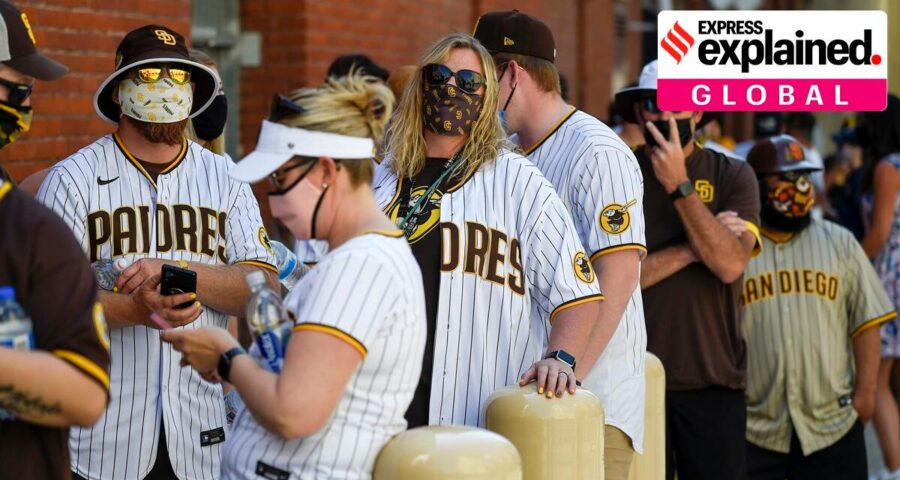 A number of systemic factors are common amongst the nations with the worst records in tackling the pandemic, primarily inadequate healthcare systems and inconsistent government strategies. As Covid-19 spread rapidly across the globe, some countries fared worse than others. A number of systemic factors are common amongst the nations with the worst records in tackling the pandemic, primarily inadequate healthcare systems and inconsistent government strategies. A number of countries on this list are also leading the global vaccination charge and are reporting declining caseloads as a result.

Data collected from the John Hopkins Medical Institute, Our World in Data and the New York Times shows that smaller, densely populated nations tend to feature prominently as this is calculated on a per capita basis. All three sources report the same numbers as their calculation mechanism is based on public disclosures by national governments. According to the same sources, 129.4 million people have been diagnosed with Covid-19 thus far, with 2.7 million people having succumbed to the virus.

The tiny nation of Andorra, with its 77,358 residents, is landlocked between Spain and France. Known for its ski resorts and lenient taxation rates, Andorra is a popular shopping ground for French citizens who frequently venture across the border to purchase duty-free alcohol, clothes and luxury items. All of that ceased in early March when the Andorran government passed a new decree banning the sale of alcohol and tobacco to tourists in order to curb the number of foreign nationals entering the country and thus combat the rising number of Covid-19 cases. Additionally, Andorra shut down all schools and public establishments, with its telecom sector hurrying to ramp up internet speeds in an attempt to cater to the many students and professionals, who would now be working from home. These efforts initially proved to be successful and on August 22, Andorra reported that it had no new cases that day and only eight new cases over a 7-day average. Unfortunately, like several other European nations, Andorra eventually fell victim to the second wave of the virus, and by end October was reporting up to 85 new cases daily. Currently, on a per capita basis, Andorra has the highest number of Covid-19 cases of any nation globally.

Montenegro holds the distinction of being the last European country to report a Covid-19 case, with its first positive result coming on March 17, 2020. Like Andorra, it imposed strict lockdown measures in response and on May 24, 2020, the government announced that there were no more active cases in the country. Montenegro began experiencing a second wave of infections in July and reached peak levels of cases in November. The situation had worsened in October, following the death of one of its most prominent clerics Amfilohije Radovic, who had contracted Covid-19 weeks earlier. His passing resulted in an outpouring of grief from the general public, and despite government bans on public gatherings, thousands of mourners flocked to the streets to pay their respects. Political leaders from within the country and other neighbouring states also attended his funeral which proved to be a catalyst for a new wave of infections spreading across the country. Public health experts have since labelled the gatherings as a super spreader event. The Czech Republic imposed lockdown measures early, shutting down schools and placing bans on public gatherings. According to public health experts, this resulted in what is known as the paradox of success, in which preventative measures work so well that the public underestimate the severity of the threat. Dr. Ratislav Madar, the dean of the University of Ostrava’s medical school, and one of the country’s top epidemiologists, identified three factors that compounded the crisis. The first was the government’s failure to reinstate a mask mandate at the start of the summer months despite advice to contrary given to him by his own advisors. The second, was the decision to open shops ahead of Christmas and the third, a failure to react to the new variant popping up in early January. Additionally, the Czech Republic had one of the slowest vaccine rollouts in Europe and suffered from system failures and a lack of essential supplies during the early days of the vaccination drive. On March 1, 2021, facing 4,571 new cases per day, the Prime Minister introduced the strictest lockdown thus far, a move that has been successful in reducing the spread.

Surrounded on all sides by Italy, which was reporting an alarming rate of transmission, the microstate of San Marino found itself at the epicentre of the pandemic in early March 2020. With a small, albeit wealthy population, and only one hospital, it would be dependent on larger countries for everything from healthcare to vaccine supplies. As the situation escalated, San Marino counted on an agreement with Italy to supply it with vaccines, but due to a shortage across the European Union, that agreement never materialised. Vaccine manufacturers told the government of San Marino that they would only deal with the EU and appeals to the Biden administration went unheeded. However, due to its close ties with Russia, the government was able to secure emergency doses of the Sputnik V vaccine and recently began the process of inoculating its citizens. San Marino currently holds the unwanted distinction of having one of the world’s highest death rates from the coronavirus.

In late January, as news of the pandemic spread, Slovenian Prime Minister Marjan Šarec resigned and the country was tasked with forming a new government. During the transition period between the outgoing and incoming governments, the outbreak escalated. In spite of that political uncertainty, Slovenia was praised for its initial handling of the outbreak and on May 15, 2020, it declared the end of the epidemic within its borders. However, as cases re-emerged, cracks began to appear within the Slovenian healthcare system. The General Director of the University Medical Centre Maribor, Dr. Vojko Flis, went on Radio Slovenia to highlight these structural shortcomings. He spoke out about the lack of adequate healthcare infrastructure in the country, particularly in regard to its hospitals which he said were old and unsuited to accommodate patients who could spread serious infectious diseases.

Luxembourg, a landlocked tax haven, surrounded by Belgium, Germany and France, faced a unique problem during the early days of the pandemic. Ordinarily, around 43% of the country’s workforce would commute in from neighbouring countries. These workers were a bedrock of Luxembourg’s economy, holding jobs at financial institutions, insurance companies and medical centres. Thus, when the EU issued a ban against non-essential cross-border travel, Luxembourg was quick to issue a certificate that would allow foreign workers to enter the country. However, given that the regions surrounding Luxembourg were badly hit by the virus, this decision resulted in the country recording its first Covid-19 case, brought in by a commuter working at a fertility clinic in Luxembourg city.  While the government has since signed agreement with its neighbours, allowing people to work remotely while still paying local taxes, the caseload continued to rise. Worryingly, Luxembourg also experienced an outbreak in schools, with 435 pupils and staff testing positive this March. Israel reported its first Covid-19 case on the February 21, 2020, when a female citizen tested positive after returning from quarantine on the Diamond Princess Cruise ship. Currently, while Israel boasts the world’s highest vaccination rate, it is also battling one of the world’s highest infection rates. In the middle of a tense political situation – Israel has held four elections in the last two years – public opinion in the country remains divided. Protestors took to the streets in July and August of last year to criticise Prime Minister Benjamin Netanyahu’s handling of the pandemic, and a poll from the Nonpartisan Israel Democracy Institute found that just 24% of Israelis approve their government’s role in managing the crisis. Critics point to the government’s decision to open schools in May 2021 and their leniency in allowing public gatherings as one of the key factors behind the spread. Additionally, despite large numbers of tests being conducted, results often take over 48 hours to arrive, negating the effectiveness of isolating people who test positive. Since the mass vaccination drive, however, Israel has gone from a peak of 8,450 new daily cases in mid-Match to recording 351 new cases on April 1.

Bahrain faces both a public health challenge and an economic one. As Covid-19 cases rose amongst its significant migrant population, a lack of income and cramped living conditions led to many of them imploring their home countries to facilitate their return. Their desire to leave was also fuelled by what they reported as discriminatory behaviour from the local population, many of whom blamed the migrants for rising caseloads. In July of 2020, migrant workers accounted for 90% of positive cases in Bahrain, largely due to crowded living spaces and shared common facilities. As a Petro-state, Bahrain has also been particularly affected by the drop in global demand for oil and the subsequent decline in oil prices. With large public expenditure, the exodus of migrant workers and a drop in the value of oil, Bahrain’s economy has been particularly hard hit during the pandemic. In January 2021, Bahrain witnessed a 43% increase in Covid-19 cases compared to December 2020, with an estimated 17% of those being children. The country’s National Covid-19 task force attributed this spike to complacency and a non-adherence to public health measures.

Before the outbreak of the coronavirus, a John Hopkins study found that the USA was the most prepared country in the world to deal with a pandemic. However, with 30.6 million cases and 2.83 million deaths, the United States has been one of the countries worst affected by Covid-19. Initially, the Trump administration’s failure to recognise the threat of the virus was blamed for the rapidly rising number of cases. His support for fake cures, disregard of public health advisories, refusal to support mask wearing and commitment to keeping the economy open, was widely condemned by critics. However, that criticism doesn’t account for why cases skyrocketed in Democrat controlled states like New York which were free to impose their own restrictions. Decades of failing to invest in public health left hospitals and medical providers overburdened. The CDC’s Covid-19 tests were released months after other countries and their guidelines were vague and often contradictory. Data collection was inaccurate and having been reliant on globalised trade lines, masks and other essential supplies were in short supply once countries began closing their borders. More positively, America seems to be on an upward trajectory with cases declining and vaccines being administered rapidly under the new administration.

Along with Bahrain and Israel, Serbia has been praised for its efficient vaccine rollout and like them, it too had been driven by necessity. Serbia went into a strict lockdown on March 15th, 2020 but, despite warnings from doctors, eased restrictions in May amid public discontent. Critics accused the government early on of misrepresenting the true case numbers in order to encourage people to go and vote in the country’s June election which the incumbent ruling party won in a landslide. However, the government has denied these claims and has insisted that all discrepancies in the numbers were due to a failure to employ enough people for data collection. Adding to that controversy, data from the Union of doctors and Pharmacists found that the number of Serbian doctors who died from Covid-19 was considerably higher than that in the UK, despite the latter having a population nearly 8 times bigger. Experts blame this on a 2013 hiring freeze of public sector workers including doctors and nurses. As a result of the freeze, healthcare systems were overburdened and ill-prepared when the pandemic hit.