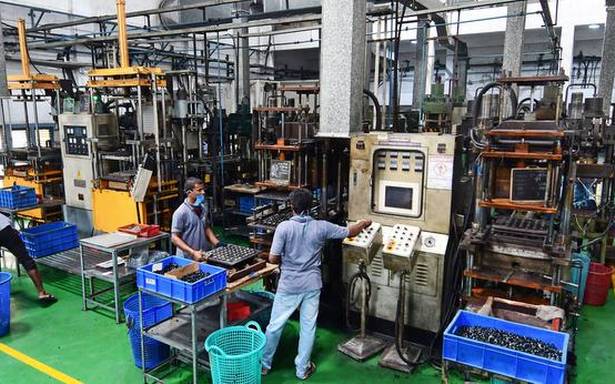 The State’s micro, small and medium enterprises sector that was hoping to rebound after a particularly harrowing time following demonetisation was struck a further blow by the COVID-19 pandemic and the nation-wide lockdown that ensued. Eleven months on, it is clear that an elaborate revival package is required to save these units from an untimely death

If things were bad for Tamil Nadu’s micro, small and medium enterprises (MSMEs) before March 2020, the last 11 months were a nightmare. Things were going downhill after demonetisation, but a fresh crisis brewed with the lockdown imposed to curb the COVID-19 pandemic with its attendant challenges — labour shortage, financial crisis, poor order books and, more recently, the rising raw material prices. “Just as we thought things were starting to look up, the spike in raw material prices pushed the business two steps backward,” says an entrepreneur, summing up the mood of the industry.

Take the case of Rajkumar, who runs a pumpset manufacturing unit with 12 workers in Coimbatore. Unforeseen challenges during the last three months have dampened his hopes of an uptick. In October 2020, his unit worked from 8 a.m. to 9 p.m., turning out over 3,000 pumps a month. But now he is able to make only 1,200 pieces and not able to assign duties to workers throughout the day.

“The lockdown came into effect during the end of the financial year 2019-2020. Hence, we did not have much of raw materials when we shut down the units. When we restarted operations, the orders started moving up and we bought raw materials according to our need. But now the prices of raw materials have started increasing and the actual manufacturing cost has gone up nearly 18% in the last four months,” Mr. Rajkumar said. Now, the brand to whom Mr. Rajkumar is supplying is demanding consignments at old rates and it wants to wait until the price stabilises.

“There is uncertainty about the availability of raw materials, the prices are revised frequently. Hence, it is difficult to quote prices,” he said, adding that the MSMEs were slowing down production. “I have new products that I want to develop, but cannot do so now because of the investments that are needed,” says Mr. Rajkumar.

While many units have cut down on capacity-utilisation, the others are continuing with normal business, but the payment cycles are fluctuating and getting delayed. K.V. Karthik, president of the Southern India Engineering Manufacturers’ Association, said, “The market will absorb only a part of the price hike. Hence, even if an MSME unit sees a profit this fiscal, it will be very low. Not all manufacturers have cut down on capacity-utilisation yet.” In November-December 2019, there were hardly any orders. Now, big companies are giving out orders and are even asking for samples. The main problem is the input costs, adds C. Sivakumar, president of the Coimbatore and Tirupur District Micro and Cottage Entrepreneurs Association.

While government spending has increased in the last two months, most orders are still being quoted at the old rates. “MSMEs that are supplying to some of the public sector units suffer nearly a 30% loss,” said S. Surulivel of Railway Suppliers Association.

R.G. Chakrapani, secretary of the Thirumazhisai Industrial Estate, said raw material prices had increased by 20%-70%, eating into the entire margin of the units. He said frequent power cuts had affected production and delayed the schedule.

Even as the Indian economy has started showing signs of revival, the 30%–35% increase in the prices — coupled with scarce supply of raw materials, steel products in particular — has dampened the mood and severely affected the recovery of many units, said M. Balachandran, president, Ambattur Industrial Estate Manufacturers’ Association.

Mr. Balachandran said allowing import of steel products at subsidised rates for MSMEs might help. The government should stop iron ore and steel exports till the indigenous supply stabilised and it should advise domestic steel majors to offer materials directly at steel yards operated by the SIDCO, he said.

K.E. Raghunathan, convener of the Consortium of Indian Associations, said the prices of steel, aluminium, rubber and plastic had gone up 35%-45% in the last three months. He said, “The Central government seems helpless. Cartels of large-scale manufacturers are evident. Unscrupulous traders are demanding higher prices and 100% advance payment from micro and small enterprises.”

The pandemic has not only impacted the business of the thousands of MSMEs across Tamil Nadu but has also taken its toll on their finances. Many said they were rebuffed when they approached banks for help.

K.V. Kanakambaram, president of the Industrial Estate Manufacturers Association, said approaching banks for money was still a tedious task for small companies. J. James, president of the Tamil Nadu Association of Cottage and Tiny Enterprises, pointed out that micro or small units that had only current accounts with banks and did not have a loan account were unable to benefit from government schemes. “Funds flow has not streamlined after the lockdown. Even street vendors are getting financial support from the government but not the micro units,” he said.

When the MSMEs resumed operations, the government did come to their aid with the Emergency Credit Line Guarantee Scheme (ECLGS), and the market has revived after one-and-a-half years of slowdown. Workers who went home during the lockdown are beginning to return. But, owing to the lack of adequate trains, the units are being forced to spend huge sums on the return of workers. If the market trend continues and the government extends a supporting hand, the MSMEs are likely to start investing in machinery next financial year, said R. Ramamurthy, former president of the Coimbatore District Small Industries Association (CODISSIA).

Most of the money released under the scheme has been used to meet the high raw material prices. Hence, the amount should be increased, more trains operated and the price set by the public sector units and government departments for their orders revised, he said.

CODISSIA president M.V. Ramesh Babu said the effort to form a consortium to purchase raw materials in bulk from the government organisations such as SAIL would take time. What the MSMEs wanted now was immediate measures to control prices.

MSMEs in Chennai expressed concerns over other problems that they have been struggling with. For instance, the consent fee charged by the Tamil Nadu Pollution Control Board (TNPCB) for issue of approval is based on the value of the Gross Fixed Assets of the industries. They take into account the value of land and buildings, in addition to the value of the plant and machinery, to arrive at the Gross Fixed Asset. “For MSMEs that started their units on rented premises much earlier and apply now for the TNPCB’s consent, the fee percentage on the annual rental value of the building multiplied 20 times, adding up to a daunting sum payable for the permission,” Mr. Balachandran of the Ambattur Industrial Estate said. The Kerala government considered this anomaly and reduced the period to three years of rental value. “We have been requesting the TNPCB for a similar relief,” he said.

Mangat Ram Sharma, Secretary, Tamil Nadu Micro, Small and Medium Enterprises Department, said, “We are aware of the concerns of the MSME units across the State and we have been taking proactive measures. Even after the units opened after the lockdown was lifted, the government is monitoring their situation on a daily basis and near normalcy has returned,” he said. On the issue of rising raw material costs, he said the general managers of the District Industrial Centres had been instructed to help MSMEs form a consortium for bulk raw material procurement to cut down the costs.

Such a consortium at Hosur, ‘Hosemech’, has reportedly been able to save on raw material costs by 5%-10%. To deal with the raw material issues in Coimbatore, the general manager, DIC, Coimbatore, was instructed to coordinate with SAIL, VIZAG Steel, SIDCO and all associations in the district. Two meetings were conducted on November 5 and December 17, 2020. “Reopening of the SAIL yard was discussed. Further, the associations have decided to form a consortium to source raw materials in bulk,” Mr. Sharma said.

“To help MSMEs get loans hassle-free under this scheme, the government has ordered exemption from the payment of stamp duty for registration of agreement relating to deposit of title deeds executed for securing loans availed from banks and financial institutions up to March 31, 2021,” Mr. Sharma said.