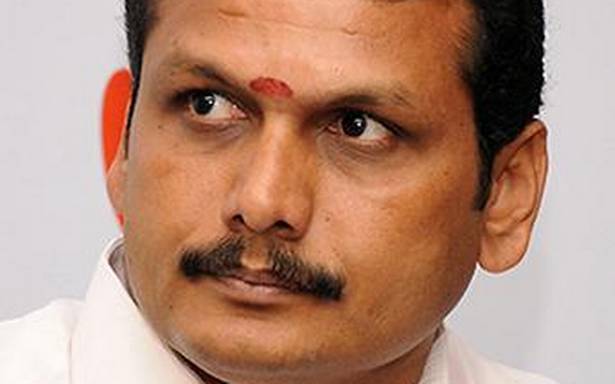 Summoned to appear before Investigation Officer on August 11.

The Enforcement Directorate has registered a case under the Prevention of Money Laundering Act against V. Senthil Balaji, Minister for Electricity, Prohibition and Excise.

He has been summoned to appear before the agency in Madurai on August 11, official sources told The Hindu on Sunday.

The offence of money laundering is derived from three other criminal cases registered against Mr. Balaji by the Central Crime Branch of Chennai Police on charges of cheating etc., during his tenure as the State Transport Minister in the AIADMK regime.

The case under PMLA Act was registered last week and summons sent to the Minister’s known address. Of the three cases booked against Mr. Balaji by the Chennai Police, one was quashed by the Madras High Court.

Though money laundering cases are based on First Information Reports of other law-enforcing agencies, the outcome of such cases need not have a bearing on the investigation into the offence under PMLA Act, the sources said.

The CCB of the Chennai Police chargesheeted Mr. Balaji and several others, including the then Transport Department officials, in three different cases. The latest chargesheet filed in March 2021 accused him of serious corrupt practices in the recruitment of staff.

It was alleged that Mr. Balaji, while holding office as Minister for Transport, entered into a criminal conspiracy with the Managing Directors and other officers of all the State Transport Undertakings (STUs) and other “with an ulterior motive to obtain illegal gratification from the candidates in the matter of appointing them as Driver, Conductor, Junior Trades Man, Junior Assistant, Junior Engineer and Assistant Engineer in the Transport Corporations.”

Key officials who were part of the criminal conspiracy were accused of not following the communal reservation and fraudulently altering and forging the original interview marks of the candidates in the records with dishonest intention of cheating the meritorious candidates.

The Registers containing the name, application number, interview number, caste, educational marks, interview marks and other details maintained in the Personnel Section were tampered and forged to give appointment orders to ineligible candidates, the charge sheet said.