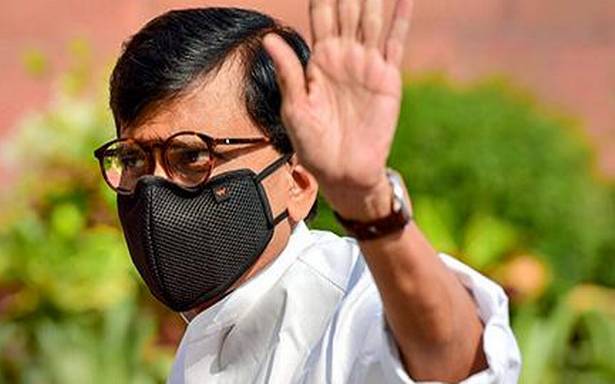 This was a “direct attack on democracy” and sovereignty of independent institutions of the country, Mr. Raut claimed.

Shiv Sena MP Sanjay Raut on Tuesday alleged that the Election Commission’s decision to bar West Bengal Chief Minister Mamata Banerjee from campaigning for 24 hours was taken at the behest of the BJP.

This was a “direct attack on democracy” and sovereignty of independent institutions of the country, Mr. Raut claimed, and asked why only Ms. Banerjee was punished when other parties also violated some or the other rules during the ongoing West Bengal election.

Terming Ms. Banerjee as the “Bengal Tigress”, the Sena’s chief spokesperson expressed solidarity with her and claimed she will win the election in her State.

The Shiv Sena, which is not contesting the West Bengal polls, has extended its support to Ms. Banerjee, who heads the Trinamool Congress (TMC).

The Election Commission (EC) on Monday barred Ms. Banerjee from campaigning for 24 hours over her remarks against Central forces and a statement which had alleged religious overtones.

Reacting to it, Mr. Raut in a tweet said, “ECI has imposed a ban on Mamta didi for 24 hours. This is clearly done at the behest of BJP, ruling party in India.” “It is a direct attack on democracy and sovereignty of independent institutions of India. solidarity with Bengal Tigress, @MamataOfficial @derekobrienmp,” the Rajya Sabha member added.

Ms. Banerjee sat on a dharna in Kolkata on Tuesday to protest against the poll panel’s “unconstitutional decision”.

“Why Mamata didi is being punished alone by the EC when every political party is violating some or the other rules of the model code of conduct?” Mr. Raut later asked while talking to reporters.

Leaders of a party from other States are going to West Bengal and making controversial statements, but there is no action against them, he said, without naming anyone.

“The ongoing West Bengal election is like a “new Mahabharat,” the Shiv Sena leader said.

“Like the previous one (Mahabharat), nobody is following the code of warfare in this new Mahabharat as well…I believe Banerjee will win this election,” Mr. Raut said.