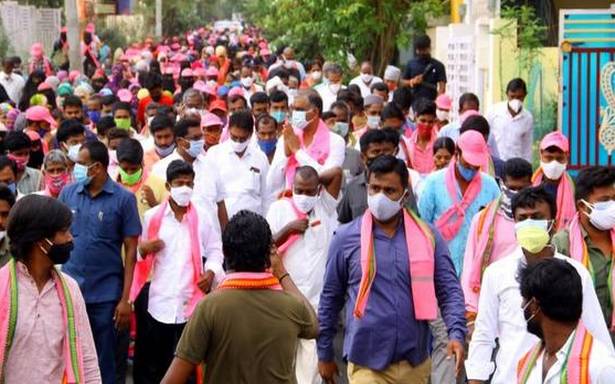 The campaign for the election to Siddipet Municipality peaked with only 24 hours remaining for campaigning for the civic body elections.

As far as the ruling Telangana Rashtra Samithi is concerned, Finance Minister T. Harish Rao has taken up the total responsibility right from selection of candidates to ensure their victory at the hustings. From BJP it is Dubbak MLA M. Raghunandan Rao who has taken the onus of steering his party through the elections while it is former MLA T. Narsa Reddy of the Congress party who is working hard to ensure his party wins the elections.

The campaigners are focusing on house-to-house campaign rather than public meetings in view of COVID-19 restrictions on gatherings. However, at some places considerably large number of people gathered to attend the campaigning and many of them not wearing masks and social distancing going for a toss.

Mr. Harish Rao campaigned in ward numbers 8, 9, 12, 27, 29, 30, 41, 42 and 43. “Siddipet become a model for the State and we have to continue this. Your complete support is essential to continue the development. There is no drinking water problem now and every house is being supplied with safe drinking water. Underground drainage works, taken up with a cost of around ₹ 300 crore, is nearing completion and 80 % of the work was over. ₹ 1,100 crore was spent on double bedroom houses in the district headquarters alone. Chose between who work for you and who come at the time of polling only and seek votes,” said Mr. Harish Rao while addressing voters.

As part of election campaign, BJP state president Bandi Sanjay Kumar participated in election campaign rally in the town. He claimed that Centre has contributed major chunk of funds for the development of Siddipet and dared Mr. Harish Rao to come open with a white paper on the source of funds. He said that 2,977 double bedroom houses were sanctioned for Siddipet by the Centre and the TRS is claiming as if it was given by the State government.