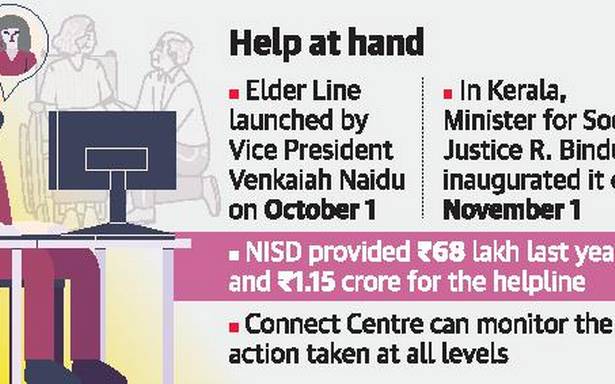 Helpline logs 6,144 calls within 10 days of launch in State

On the second day after the formal launch of Elder Line, a toll-free helpline (14567) for the elderly, in the State, its ‘Connect Centre’ at Poojappura here registered more than 1,000 calls in a 12-hour period.

Within 10 days from the helpline launch on November 1, a total of 6,144 calls from across the State were logged.

The pan-India Elder Line has been set up by the Union Ministry of Social Justice and Empowerment, National Institute of Social Defence (NISD), and the State Governments with technical support from Tata Trust to provide information and guidance on problems faced by the elderly on a day-to-day basis. In Kerala, the helpline functions under the Social Justice Department.

Higher than other States

The number of calls received at the Connect Centre here is much more than that received by other States, says the Elder Line team here. This is despite the lack of major publicity drives.

The number is more than what the seven call officers can attend to. Of the total calls in the first 10 days of the month, only 2,060 could be answered. “We can attend around 400 calls a day.”

Once the peak call period is over, the team will try and get in touch with people whose calls went unattended. Three more call officers are expected to begin work soon.

While the maximum number of calls last month pertained to pension-related queries, at present complaints on abuse form a good chunk. Many calls require some field-level intervention, which is the responsibility of the seven field response officers.

Among the calls received till November 10, 1,266 were actionable, while 701 did not fall within the protocol prepared by the NISD.

“We are more of a facilitation centre, providing information and guidance, emotional support, and when needed rescuing the elderly. But we cannot solve cases pending in courts or police stations. We can update the elderly about the status of such cases, the next hearing date, why a case is pending, or get in touch with a lawyer. There are limitations too on our intervention in family matters,” says a team member.

The Elder Line team has prepared a database of stakeholders across departments and agencies such as police, health, local self-government, Kudumbashree, District Legal Services Authority, ASHA workers, civil defence volunteers and so on right down to the ward level in order to provide help to the elderly.