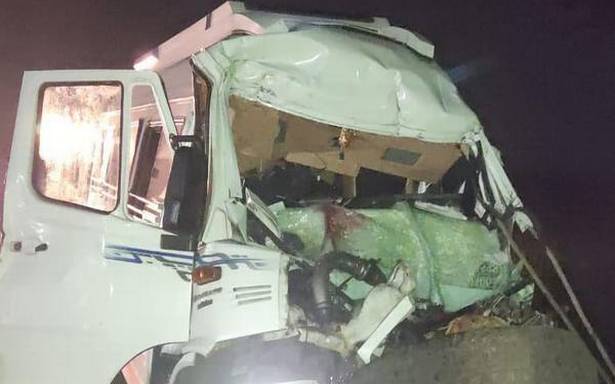 A group of 14 was returning from Andhra Pradesh

Eight persons from Tamil Nadu were killed and seven injured when the van in which they were travelling rammed a stationary lorry at Damaramadugu, 11 km from here, in the wee hours of Sunday.

The deceased included five women from Perambur and its surrounding areas in Chennai, police said.

According to police, the mishap occurred around 2 a.m. when the driver of the van apparently lost control of the vehicle due to fog and hit the lorry close to a petrol pump, resulting in the instantaneous death of seven persons, including the driver. Eight persons suffered injuries and one of them died on the way to hospital, Buchireddipalem sub-inspector K. Prasad Reddy said after overseeing the shifting of the injured to the Government General Hospital, Nellore.

The deceased were identified by the police as Nandakumar (67), Maniratnam (29), Sujatha (50), Asha (60), Revathi (60), Sadgunadevi, Padmini and Gurnadhareddy, the driver.

Those who were seated in the rear of the van escaped with injuries, while the persons seated in the front rows died on the spot. The 14 pilgrims were returning home after visiting, among other places, Srisailam and Brahmamgari Matham.